Our knowledge about the rise of oxygen gas in Earth’s atmosphere comes from multiple lines of evidence in the rock record, including the age and distribution of banded iron formations, the presence of microfossils in oceanic rocks, and the isotopes of sulfur.

However, this article is just focus on Banded Iron Formation. 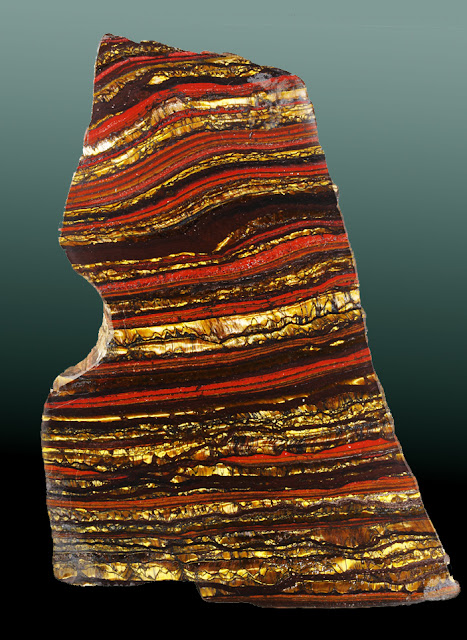 Summary:Banded-iron formations (BIFs) are sedimentary mineral deposits consisting of alternating beds of iron-rich minerals (mostly hematite) and silica-rich layers (chert or quartz) formed about 3.0 to 1.8 billion years ago. Theory suggests BIFs are associated with the capture of oxygen released by photosynthetic processes by iron dissolved in ancient ocean water. Once nearly all the free iron was consumed in seawater, oxygen could gradually accumulate in the atmosphere, allowing an ozone layer to form. BIF deposits are extensive in many locations, occurring as deposits, hundreds to thousands of feet thick. During Precambrian time, BIF deposits probably extensively covered large parts of the global ocean basins. The BIFs we see today are only remnants of what were probably every extensive deposits. BIFs are the major source of the world's iron ore and are found preserved on all major continental shield regions.

Banded-iron formation (BIF) isconsists of layers of iron oxides (typically eithermagnetite orhematite) separated by layers ofchert (silica-rich sedimentary rock). Each layer is usually narrow (millimeters to few centimeters). The rock has a distinctively banded appearance because of differently colored lighter silica- and darker iron-rich layers. In some cases BIFs may containsiderite (carbonate iron-bearing mineral) or pyrite (sulfide) in place of iron oxides and instead of chert the rock may contain carbonaceous (rich in organic matter)shale.

It is a chemogenic sedimentary rock (material is believed to be chemically precipitated on the seafloor). Because of old age BIFs generally have been metamorphosed to a various degrees (especially older types), but the rock has largely retained its original appearance because its constituent minerals are fairly stable at higher temperatures and pressures. These rocks can be described as metasedimentary chemogenic rocks.

In the 1960s, Preston Cloud, a geology professor at the University of California, Santa Barbara, became interested in a particular kind of rock known as a Banded Iron Formation (or BIF). They provide an important source of iron for making automobiles, and provide evidence for the lack of oxygen gas on the early Earth.

Cloud realized that the widespread occurrence of BIFs meant that the conditions needed to form them must have been common on the ancient Earth, and not common after 1.8 billion years ago. Shale and chert often form in oceanenvironments today, wheresediments and silica-shelled microorganisms accumulate gradually on theseafloor and eventually turn into rock. But iron is less common in younger oceanicsedimentary rocks. This is partly because there are only a few sources of iron available to the ocean: isolated volcanic vents in the deep ocean and material weathered from continental rocks and carried to sea by rivers.

Specimen and photograph: A. Fraser

Most importantly, it is difficult to transport iron very far from these sources today because when iron reacts with oxygengas, it becomesinsoluble (it cannot be dissolved in water) and forms asolid particle. Cloud understood that for large deposits of iron to exist all over the world’s oceans, the iron must have existed in a dissolved form. This way, it could be transported long distances in seawater from its sources to the locations where BIFs formed. This would be possible only if there were little or no oxygen gas in the atmosphere and ocean at the time the BIFs were being deposited. Cloud recognized that since BIFs could not form in the presence of oxygen, the end of BIF deposition probably marked the first occurrence of abundant oxygen gas on Earth (Cloud, 1968).

Cloud further reasoned that, for dissolved iron to finallyprecipitate and be deposited, the iron would have had to react with small amounts of oxygen near the deposits. Small amounts of oxygen could have been produced by the first photosynthetic bacteria living in the open ocean. When the dissolved iron encountered the oxygen produced by the photosynthesizing bacteria, the iron would have precipitated out of seawater in the form ofminerals that make up the iron-rich layers of BIFs: hematite (Fe2O3) and magnetite (Fe3O4), according to the following reactions:

The picture that emerged from Cloud’s studies of BIFs was that small amounts of oxygengas, produced by photosynthesis, allowed BIFs to begin forming more than 3 billion years ago. The abrupt disappearance of BIFs around 1.8 billion years ago probably marked the time when oxygen gas became too abundant to allow dissolved iron to be transported in the oceans.

It is interesting to note that BIFs reappeared briefly in a few places around 700 millionyears ago,during a period of extremeglaciation when evidence suggests that Earth’s oceans were entirely covered with sea ice. This would have essentially prevented the oceans from interacting with theatmosphere, limiting the supply of oxygengas in the water and again allowing dissolved iron to be transported throughout the oceans. When the sea ice melted, the presence of oxygen would have again allowed the iron toprecipitate.