a.       Space available for the accumulation of sediment

·         The evolution of sedimentary basins may include:

1. Basin axis is the lowest point on the basement surface

2. Topographic axis is the lowest point on the depositional surface

3. Depocentre is the point of thickest sediment accumulation

·         The driving mechanisms of subsidence are ultimately related to processes within the relatively rigid, cooled thermal boundary layer of the Earth known as the lithosphere. The lithosphere is composed of a number of tectonic plates that are in relative motion with one another. The relative motion produces deformation concentrated along plate boundaries which are of three basic types:

3. Transform boundaries form where plates move laterally past one another. These can be complex andare associated with a variety of basin types.

Using the plate tectonics paradigm, sedimentary basins have been classified principally in terms of the type of lithospheric substratum (continental, oceanic, transitional), the position with respect to a plate boundary (interplate, intraplate) and the type of plate margin (divergent, convergent, transform) closest to the basin.

1.      Size and Shape of basin deposits, including the nature of the floor and flanks of the basin

·         Interrelationship Between Tectonics - Paleoclimates - and Eustacy

Wilson Cycle about opening and closing of ocean basins and creation of continental crust. 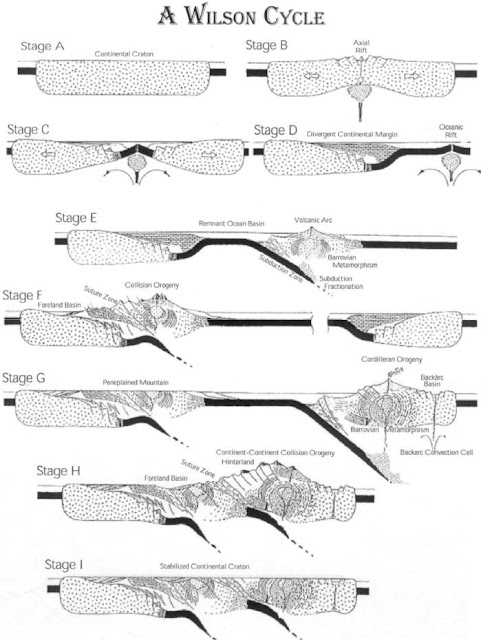