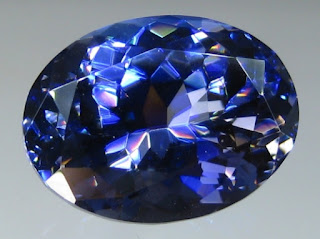 California designated benitoite as the official state gemstone in 1985. Benitoite is sometimes called the "blue diamond." First discovered near the headwaters of the San Benito River in 1907 (hence the name), benitoite is a very rare gem that ranges in colour from a light transparent blue to dark, sapphire blue, or occasionally a violet shade.

Benitoite (pronounced "ben-ee-toe-ite") was initially thought to be a sapphire, but after careful analysis was found to be a mineral new to science. Gem quality benitoite cyrstals are found only in California.

Benitoite typically occurs with an unusual set of minerals, along with minerals that make up its host rock. Frequently associated minerals include: natrolite, neptunite, joaquinite, serpentine and albite.