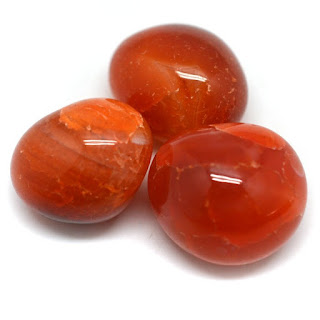 A glassy, translucent stone, Carnelian is an orange-coloured variety of Chalcedony , a mineral of the Quartz family. Its colour varies from pale pinkish-orange to a deep rusty brown, though it is most known for its brilliant orange and red-orange crystals. Its name comes from a Latin word meaning "flesh."Carnelian (also spelled cornelian) is a brownish-red mineral which is commonly used as a semi-precious gemstone. Similar to carnelian is sard, which is generally harder and darker (the difference is not rigidly defined, and the two names are often used interchangeably). Both carnelian and sard are varieties of the silica mineral chalcedony coloured by impurities of iron oxide. The colour can vary greatly, ranging from pale orange to an intense almost-black coloration. It is most common in Brazil, India, Siberia and Germany. 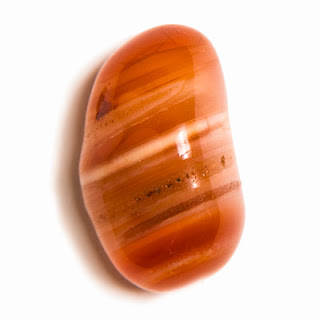 The bow drill was used to drill holes into carnelian in Mehrgarh between 4th-5th millennium BC.Carnelian was recovered from Bronze Age Minoan layers at Knossos on Crete in a form that demonstrated its use in decorative arts; this use dates to approximately 1800 BC. Carnelian was used widely during Roman times to make engraved gems for signet or seal rings for imprinting a seal with wax on correspondence or other important documents. Hot wax does not stick to carnelian. Sard was used for Assyrian cylinder seals, Egyptian and Phoenician scarabs, and early Greek and Etruscan gems. The Hebrew odem (translated sardius), the first stone in the High Priest's breastplate, was a red stone, probably sard but perhaps red jasper. 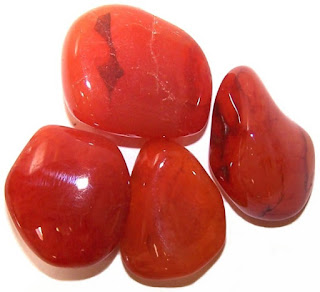 Although now the more common term, "carnelian" is a 16th-century corruption of the 14th-century word "cornelian" (and its associated orthographies corneline and cornalyn). Cornelian, cognate with similar words in several Romance languages, comes from the Mediaeval Latin corneolus, itself derived from the Latin word cornum, the cornel cherry, whose translucent red fruits resemble the stone. The Oxford English Dictionary calls "carnelian" a perversion of "cornelian", by subsequent analogy with the Latin word caro, carnis, flesh. According to Pliny the Elder, sard derives its name from the city of Sardis in Lydia, but it more likely comes from the Persian word سرد sered, meaning yellowish red.

Orange stones, especially the carnelians, are excellent aids for training, coordination of physical exercise programs, and for balancing body energy levels. Carnelians boost a listless attitude and can stimulate the appetite.

Used as a professional support crystal, Carnelian aids architects, builders and construction workers in their creation of master buildings, stimulates power and stamina in athletes and military personnel, establishes form and organisation in journalists, and stimulates motivation in salespersons.

Carnelian is said to attract prosperity, new resources and good luck. It is a talisman for success in any money-making venture. In the workplace, it is a crystal of ambition, drive and determination, and wards off undue pressures of co-workers or impersonal corporations with unrealistic expectations.

Carnelian clarifies the voice. It is the Singer's Stone. It also promotes confidence for performances on stage or in live media.

Carnelian is traditionally known to guard against falling masonry and accidents with tools. Today it guards the home from theft, fire, storm or accident.

Carnelian lends the courage needed to help overcome difficulties and defend a cause. It promotes idealism, a sense of community and pragmatism.

Orange and red Carnelian are important crystals to use for love, and for the consummation of love. Orange crystals, in particular, are fertility and potency symbols and are linked with conceiving a child. Carnelian of either color may help in rekindling passions that might have faded in an otherwise loving relationship