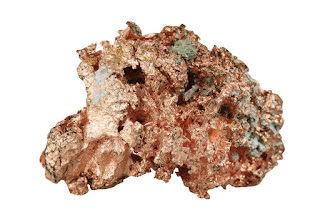 Copper is a chemical element with symbol Cu (from Latin: cuprum) and atomic number 29. It is a soft, malleable and ductile metal with very high thermal and electrical conductivity. A freshly exposed surface of pure copper has a reddish-orange colour. It is used as a conductor of heat and electricity, as a building material and as a constituent of various metal alloys, such as sterling silver used in jewellery, cupronickel used to make marine hardware and coins and constantan used in strain gauges and thermocouples for temperature measurement.

In the Roman era, copper was principally mined on Cyprus, the origin of the name of the metal, from aes сyprium (metal of Cyprus), later corrupted to сuprum, from which the words copper (English), cuivre (French), Koper (Dutch) and Kupfer (German) are all derived. The commonly encountered compounds are copper(II) salts, which often impart blue or green colours to such minerals as azurite, malachite, and turquoise, and have been used widely and historically as pigments. Architectural structures built with copper (usually roofing elements) corrode to give green verdigris (or patina). Decorative art prominently features copper, both in the elemental metal and in compounds as pigments. Copper compounds are also used as bacteriostatic agents, fungicides, and wood preservatives. 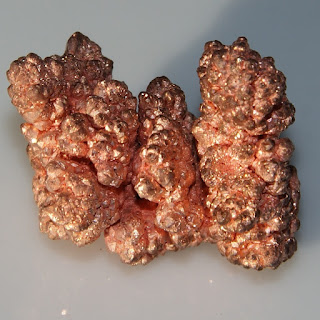 Copper is essential to all living organisms as a trace dietary mineral because it is a key constituent of the respiratory enzyme complex cytochrome c oxidase. In molluscs and crustaceans copper is a constituent of the blood pigment hemocyanin, replaced by the iron-complex haemoglobin in fish and other vertebrates. In humans, copper is found mainly in the liver, muscle, and bone. The adult body contains between 1.4 and 2.1 mg of copper per kilogram of body weight. Hence a healthy human weighing 60 kilogram contains approximately 0.1 g of copper. However, this small amount is essential to the overall human well-being.

Copper, silver and gold are in group 11 of the periodic table, and they share certain attributes: they have one s-orbital electron on top of a filled d-electron shell and are characterised by high ductility and electrical and thermal conductivity. The filled d-shells in these elements contribute little to interatomic interactions, which are dominated by the s-electrons through metallic bonds. Unlike metals with incomplete d-shells, metallic bonds in copper are lacking a covalent character and are relatively weak. This observation explains the low hardness and high ductility of single crystals of copper. At the macroscopic scale, introduction of extended defects to the crystal lattice, such as grain boundaries, hinders flow of the material under applied stress, thereby increasing its hardness. For this reason, copper is usually supplied in a fine-grained polycrystalline form, which has greater strength than monocrystalline forms. 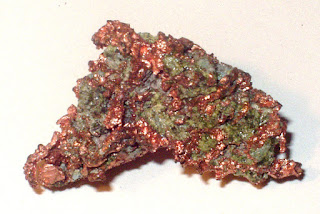 The softness of copper partly explains its high electrical conductivity (59.6×106 S/m) and high thermal conductivity, the second highest (second only to silver) among pure metals at room temperature. This is because the resistivity to electron transport in metals at room temperature originates primarily from scattering of electrons on thermal vibrations of the lattice, which are relatively weak in a soft metal. The maximum permissible current density of copper in open air is approximately 3.1×106 A/m2 of cross-sectional area, above which it begins to heat excessively.

Copper is one of four metallic elements with a natural colour other than gray or silver, the others being caesium (yellow), gold (yellow), and osmium (bluish). Pure copper is orange-red and acquires a reddish tarnish when exposed to air. The characteristic colour of copper results from the electronic transitions between the filled 3d and half-empty 4s atomic shells – the energy difference between these shells corresponds to orange light. The same mechanism causes the yellow colour of gold and caesium.

As with different metals, if copper is positioned in touch with every other metal, galvanic corrosion will arise. 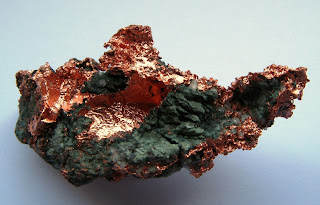 Copper does not react with water but it does slowly react with atmospheric oxygen to form a layer of brown-black copper oxide which, unlike the rust that forms on iron in moist air, protects the underlying metal from further corrosion (passivation). A green layer of verdigris (copper carbonate) can often be seen on old copper structures, such as the roofing of many older buildings and the Statue of Liberty. Copper tarnishes when exposed to some sulphur compounds, with which it reacts to form various copper sulphides.

There are 29 isotopes of copper. 63Cu and 65Cu are stable, with 63Cu comprising approximately 69% of naturally occurring copper; both have a spin of  3⁄2. The other isotopes are radioactive, with the most stable being 67Cu with a half-life of 61.83 hours.Seven metastable isotopes have been characterised; 68Cu is the longest-lived with a half-life of 3.8 minutes. Isotopes with a mass number above 64 decay by β−, whereas those with a mass number below 64 decay by β+. 64Cu, which has a half-life of 12.7 hours, decays both ways.

62Cu and 64Cu have huge programs. 62Cu is used in 62Cu-PTSM as a radioactive tracer for positron emission tomography.

Copper is produced in massive stars and is present in the Earth's crust in a proportion of about 50 parts per million (ppm). It occurs as native copper, in the copper sulphides chalcopyrite and chalcocite, in the copper carbonates azurite and malachite, and in the copper(I) oxide mineral cuprite. The largest mass of elemental copper discovered weighed 420 tonnes and was found in 1857 on the Keweenaw Peninsula in Michigan, US. Native copper is a polycrystal, with the largest single crystal ever described measuring 4.4×3.2×3.2 cm.