The Giant's Causeway is an area of about 40,000 interlocking basalt columns, the result of an ancient volcanic eruption. It is also known as Clochán an Aifir or Clochán na bhFomhórach in Irish and tha Giant's Causey in Ulster-Scots.

The Giant's Causeway northern Ireland, renowned for its polygonal columns of layered basalt, is the only UNESCO World Heritage Site in Northern Ireland and in 2015 was awarded the UKs Best Heritage Attraction at the British Travel Awards. 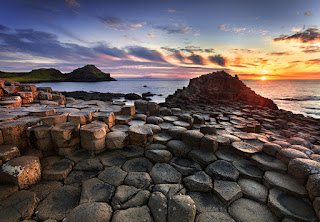 Resulting from a volcanic eruption 60 million years ago, that is the point of interest of a delegated Area of Outstanding Natural Beauty and has attracted site visitors for centuries. It harbours a wealth of neighborhood and natural history.

Sea birds can be seen off the coast around the Causeway, with species together with fulmar, petrel and razor-invoice being often observed along uncommon and uncommon plant species on the cliffs and close by rock formations.

The Giant’s Causeway is also steeped in myth and legend. Some say it was carved from the coast by the mighty giant, Finn McCool who left behind an ancient home full of folklore. Look out for clues of his existence including The Giant’s Boot and Wishing Chair.

Rising and blending into the landscape, with walls of glass, basalt columns and a state of the art interior designed by award winning architects Heneghan-Peng, The Giant’s Causeway Visitor Centre is truly innovative. The grass roof offers 360 degree views of the Causeway coastline. Explore the interactive spaces, watch Finn McCool on the big screen and unlock the secrets of this inspirational landscape. 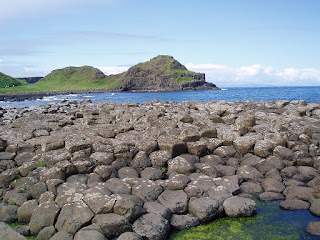 The uncommon formation become born of natural techniques throughout the Paleogene (65-23 million years ago), while Northern Ireland became problem to effective volcanic activity. During this period, molten basalt got here into touch with chalk beds, forming a lava plateau. When the lava cooled quick, the plateau gotten smaller and cracked, forming 40,000 hexagonal columns of varying heights that appear to be massive stepping stones. The largest stand nearly 36 toes tall. 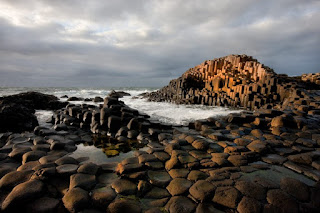 According to legend, an Irish giant by the name of Fionn mac Cumhaill constructed the causeway himself so that he could skip over to Scotland to defeat his Scottish rival, Benandonner. Apparently, while in transit to Scotland, Fionn fell asleep, and Benandonner decided to cross the causeway to look for his competitor. To protect her slumbering slumbering husband, Fionn’s wife gathered him up and wrapped him up in cloth in order to camouflage him as their child. When Benandonner made it to Northern Ireland tour he saw the large infant and could only imagine how big Fionn must be. Frightened, Benandonner fled back to Scotland. But the causeway remained.

Although the phenomenon of basalt columns is relatively rare, there are a few dramatic examples of the rock formation found around the world, including Fingal’s Cave in Scotland, Los Prismas Basálticos in Mexico, and the Devil’s Postpile in California. 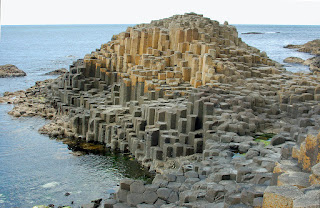 It is located in County Antrim on the northeast coast of Northern Ireland, about three miles (4.8 km) northeast of the town of Bushmills. It was declared a World Heritage Site by UNESCO in 1986, and a national nature reserve in 1987 by the Department of the Environment for Northern Ireland. In a 2005 poll of Radio Times readers, the Giant's Causeway was named as the fourth greatest natural wonder in the United Kingdom. The tops of the columns form stepping stones that lead from the cliff foot and disappear under the sea. Most of the columns are hexagonal, although there are also some with four, five, seven or eight sides. The tallest are about 12 metres (39 ft) high, and the solidified lava in the cliffs is 28 metres (92 ft) thick in places. 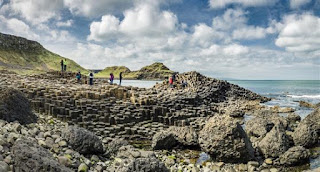 Much of the Giant's Causeway and Causeway Coast World Heritage Site is today owned and managed by the National Trust and it is one of the most popular tourist attractions in Northern Ireland. The remainder of the site is owned by the Crown Estate and a number of private landowners.

In tour of Ireland Giant's Causeway, there are four stunning trails at the Giant’s Causeway suited to every ability, from a pram friendly jaunt to a challenging coastal hike and in addition, a new accessible cliff top walk for families and people with disabilities. The area is suitable for picnics, cliff and country walks, and dogs are welcome on leads (guide dogs only within the Visitor Centre).

In guided tours of Ireland, for visitors who do not wish to avail of the facilities on-site, alternative parking is available during peak times at the Railway car park adjacent to the Causeway (£6 per day), from which visitors can walk to the stones for free. Contact Visitor Information for more details. Alternative catering is provided at the site by the Causeway Hotel, The Nook and McConaghy's shop.