Via Marginal Revolution, a very clever idea from Scott Ellison:

I propose temporarily stopping time. This means that today’s date, Tuesday, March 17th, 2020, will remain the current date until further notice. This also means that everything that happens in time (e.g. mortgage due dates, payrolls, travel bookings, stock market trading, contractor gigs, concerts, sporting events) will be paused. It also means that all of these events remain on the books, and will continue as planned once time is resumed.

I mentioned "the debt clock keeps ticking when the economy shuts down" as the central problem, but didn't go as far as to advocate this simple solution. (Which I still don't, read on.)

The central problem is really a coordination problem. A owes B money. A is shut down so can't pay. B understands and would be happy to wait until the crisis is over. But B owes C money, so can't wait. And on down the line it goes. It's like daylight savings time. We could individually decide to move things an hour earlier in spring, but mostly A wants to show up at work when B will be there. There are lots of coordination problems like this, and a useful function of government is to solve them.

But the economy is not completely shut down. Food and medicine need to keep going, and need to be paid! If we literally stop all payments, shutting down the ATM machines, credit card machines, and salaries of the 80% or so who will keep their jobs, we create an insane mess. So some clocks shut down and some others don't and now you have a mess on your hands.

So while this is a useful metaphor and guide to a central problem now, it's not a practical solution.   An economy is much like a human. We can sleep, but we can't freeze the clock, shut down totally and  restart again.

I think really this is a metaphor for widespread forebearance, and we can see  a hint of this in what the government is already doing -- no evictions, urging banks to forbear loans, for example.   Widespread debt forbearance in crisis is an age-old tradition.  Courts sort of shut down, and decide in a rough and ready way which bills and contracts will be enforced right away and which won't. It does, however, stop somewhere, ending up in C art D's lap. It usually means a transfer from whoever entered the crisis not immensely leveraged to those that did.

Again I am reminded of Graham Allison in understanding what's going on.  Bureaucracies cannot innovate much in a crisis. You only get the options they have rehearsed. Our government has rehearsed a replay of 2008 stimulus and bail out, and that's what we're mostly getting, though a virus and government-imposed shutdown are a totally different economic problem than a bank run. Adding ex-post  forbearance clauses to lots of -- but not all --  debt contracts and payments is a nice idea, but needs much more fleshing out than a pronouncement from the President that the clock has stopped.

But save your clever ideas. In the aftermath, our job as economists is to write the playbook for next time. There will be a next time. Let us do a better job than the mess of bailout, Dodd-Frank regulation, stress tests, macro-prudential policy, QE, and the rest that remains the playbook left behind from 2008.

Update: on how bureaucracies cannot innovate in a crisis. 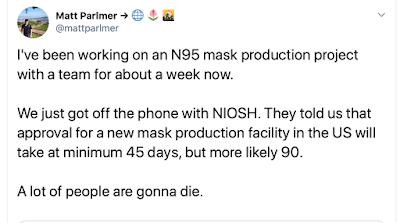