How soon does it end? - Barokong

How soon does it end? This is a big question which models can help us with.

Jesús Fernández-Villaverde and Chad Jones are working on estimating and simulating a epidemiological (SIRD) model of Covid-19. The numbers are based entirely on numbers of deaths, which eliminates much data uncertainty. It includes an initial spreading rate (R0), and the introduction of public policies that lower that rate. One may object to economists treading in these waters but economists (especially of such great talent) are really good at fitting models to data. 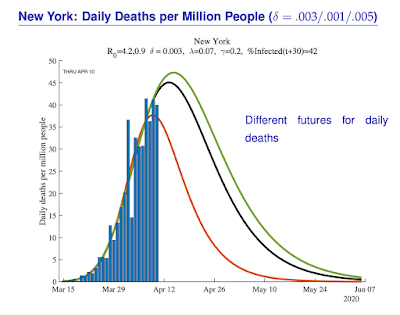 Here is how the model fits New York daily deaths per million. The three lines reflect three different possibilities for the death rate, 0.1%, 0.3% and 0.5% of infected people. You can see how the three death rates fit about the same up to now (the other parameters get reoptimized), but differ on the forecast for the future. The cumulative death rates under the three assumptions are quite different, about 800, 1200 or 1500 per million.

But what struck me is how close the peaks are -- no matter what parameters you pick, the peak is between April 11 and April 20. By mid-May things are well under control, and it's over by June. This is a really hopeful simulation for our big V U or L discussion.

The key input to seeing it over is indeed, "bending the curve," or the peak in sight.  Here is Italy, 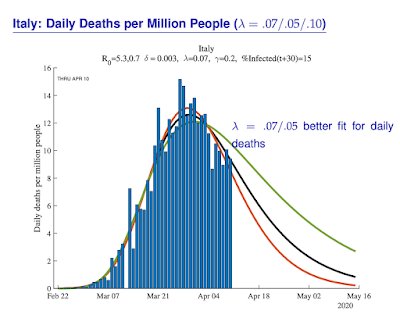 Italy is clearly past the peak, no matter what parameters you use, and will be over in a month.

Here is another insightful plot, for New York 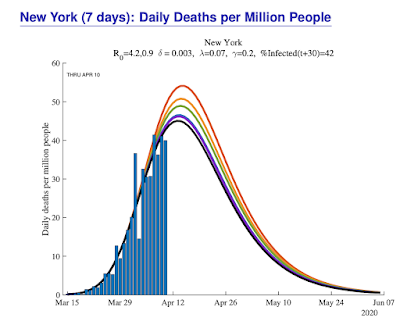 But here is California: 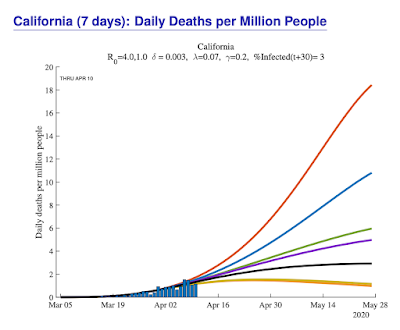 California is at a much lower level -- note the vertical scale. 2 deaths per million not 50 in NY. But we don't have that signature of exponential growth, growth slowing and then a peak. So the progression of the forecast rom red to tan (extraordinary good news) is very sensitive to the data from the last 7 days, and you can see it's a bit noisy.

This seems like great news for the V, U, L, debate. Back to work in June. There is a big assumption here. Jesús and Chad assume there is an initial reproduction rate, and policy intervenes to bring that down to a lower level. For New York, those are 4.9 and 0.9. (How many people each sick person infects.) For California, 4.0 and 1.0. They then assume that the new lower reproduction rate stays put.

If "reopening" in California means going back to a 4.0 reproduction rate, in a population that 99% of people still are uninfected, we just start right back again.

So where is a rosy economic scenario that this is over by June and the economy can get going again? Absent a vaccine, it depends on public health being able to take over form blanket shutdowns, to keep R0 below one in a population with very few (but not zero) cases.

If we just reopen there will be a second wave, or an endless half open economy. Public health -- lots of testing, tracing, isolating -- allows you to keep R0 low when there are relatively few cases without shutting down the economy.

So I think Jesús and Chad's simulations offer great hope that the economic calamity can end quickly if the public health infrastructure is in place to do what it so massively failed to do in January.

(The slide deck and paper will be up soon on Chad and Jesús websites. I saw it at our Monday zoom lunch seminar. Thanks to Chad and Jesús  for sharing the slides.)