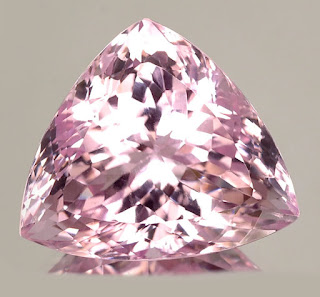 Kunzite is the pink to light purple gem variety of the mineral Spodumene. Spodumene is a common mineral, but only in several localities does it occur in transparent gem form. The main gem form of Spodumene is Kunzite, the other is the rarer Hiddenite . Yellow and colourless gem forms of Spodumene also exist, but are not commonly faceted as gemstones. Kunzite has a lovely pink colour and is becoming increasingly popular in the gemstone market.

Kunzite forms naturally as colourless, pink, lilac, yellow and green crystals. The yellow-green to emerald variety is known as Hiddenite, or Green Kunzite. The colourless to light yellow variety is known as Triphane, or Spodumene. Genuine Kunzite is quite pale in colour, with natural darker shades being higher in value. There are some heat-enhanced varieties on the market. All Kunzite is prone to fading in direct sunlight. 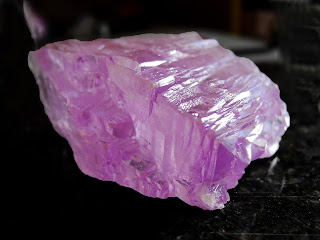 Kunzite is the pale pink to light-violet gem-quality variety of the pyroxene mineral spodumene, a lithium aluminum inosilicate. Kunzite was first discovered in Connecticut, USA, and was named after George Frederick Kunz (1856 - 1932), an American mineralogist and the former vice president and buyer for Tiffany & Company. Kunz was a legendary New York jeweller and coloured stone specialist, and he was the first to comprehensively describe the stone in 1902. 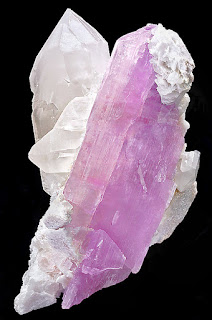 Although it was first discovered in the USA, most of the current supply of kunzite is found in Afghanistan and Pakistan. Kunzite is closely related to hiddenite, the yellow-green member of the spodumene gemstone family which was also discovered and named after an American mineralogist, W. E. Hidden; as well as the classic golden to yellow colour gem-quality spodumene. Kunzite is known to produce gemstones of great size. In fact, it's not uncommon to find fine quality stones weighing 20 carats or more. Kunzite and the entire spodumene group are important industrial sources of lithium, which is used for the making of medicines, ceramics, mobile phones and automotive batteries.

A beautiful 47-carat kunzite ring sold for over $410,000 at a Sotheby's auction of the Estate of Jacqueline Kennedy Onassis in 1996. President Kennedy purchased it as a gift for his wife, but never had the chance to give it to her.

Kunzite is composed of lithium, aluminum and silicate. Kunzite crystallizes in the monoclinic crystal system. Its prismatic crystal structure results in a distinct pleochroism which can be helpful in identifying kunzite. Kunzite exhibits perfect cleavage, a trait it shares with both diamond and topaz. With prolonged exposure to direct sunlight, kunzite's colour can fade; a distinct attribute of the spodumene family. Unlike most other pink coloured stones, kunzite is often found in very large sizes. Its vitreous luster and hardness is similar to quartz, making it softer than pink sapphire and spinel.

Named for the mineralogist and jeweller George Frederick Kunz who first catalogued it in 1902, Kunzite is the pink to violet variety of the silicate, Spodumene. It has a glassy transparency, and forms in flattened prismatic crystals with vertical striations. It is highly pleochroic, shifting from pale pink to light violet and even colourless, depending on the angle of observation, and though its perfect cleavage makes cutting difficult, it can be faceted into beautiful gems. Kunzite was first discovered in Connecticut, USA. The first significant commercial deposit was discovered 1902 in the Pala region of San Diego, California, where morganite (pink beryl ) was also discovered. The most important deposits of kunzite are from Minas Gerais, Brazil, but most of the current supply is from Afghanistan and Pakistan. Other sources include Madagascar, Myanmar and the USA. Smaller gem quality deposits have also been found in Canada, Russia, Mexico, Sweden and Western Australia.