My brief exchange with Markus Brunnermeier at the end of a Covid-19 talk  attracted some attention, and merits a more detailed intervention.Gavin Davies at FT made some comments (more later) as did the Economist.

My proposal to fund the US with perpetuities comes from a paper, here. (Sorry regular readers for the repeated plug.)  The rest is standard fiscal theory of the price level, spread over too many papers to give one more plug.

There are three main points.  First, inflation is not about money anymore -- the choice of money vs. bonds. Money -- reserves -- pay interest, so reserves are just very short-term government bonds. Inflation is about the the overall demand for government debt. That demand comes from the likelihood of the debt  being repaid, and the rate of return people require to hold debt.

Second, if we have inflation, the mechanism will be very much like a run or debt crisis. Our government rolls over very short term debt. Roughly every two years on average, the government must find new lenders to pay off the old lenders. If new lenders sniff trouble they refuse to roll over the debt and we're suddenly in big trouble. This is what happened to Greece. It's what happened to Lehman Bros. In our case, our government can redeem debt with non-interest-paying reserves, resulting in a large inflation rather than an explicit default.

2a, a run is always unpredictable. If you knew there would be a roll-over crisis next year, you would dump your government bonds this year, and the run would be on. There is a whiff of multiple equilibrium too. Our debt is nicely sustainable at 1% interest. If interest rates go up to 5%, we suddenly have north of $1 trillion additional deficits, which are not sustainable. The government  is like a family who, buying a home, got the 0.1% adjustable rate mortgage rather than the 1% (government debt prices) fixed rate mortgage because it seemed cheaper. Then rates go up. A lot.

Sure demand is high for US government debt, rates are low, and there is no inflation. But don't count on trends to continue just because they are trends. How long does high demand last? Ask Greece. Ask an airline.

Third, for this reason, I argue the US should quickly move its debt to extremely long maturities. The best are perpetuities -- bonds that pay a fixed coupon forever, and have no principal payment. When the day of surpluses arrives, the government repurchases them at market prices. By replacing 300 ore more separate government bonds with three (fixed rate, floating rate, and indexed perpetuities), treasury markets would be much more liquid. Perpetuities never need to be rolled over. As you can imagine the big dealer banks hate the idea, and then wander off to reasons that make MMT sound like bells of clarity. That they would lose the opportunity to earn the bid/ask spread off the entire stock of US treasury debt as it is rolled over might just contribute.

But we don't have to wait for perpetuities. 30 year bonds would be a good start. 50 year bonds better. The treasury could tomorrow swap floating for fixed payments.

Then we would be like the family that got the 30 year fixed mortgage. Rates go up? We don't care. By funding long, the US could eliminate the possibility of a debt crisis, a rollover crisis, a sharp inflation for a generation.

Gavin Davies shows the following graph, congratulating the Treasury for going longer after 2008. 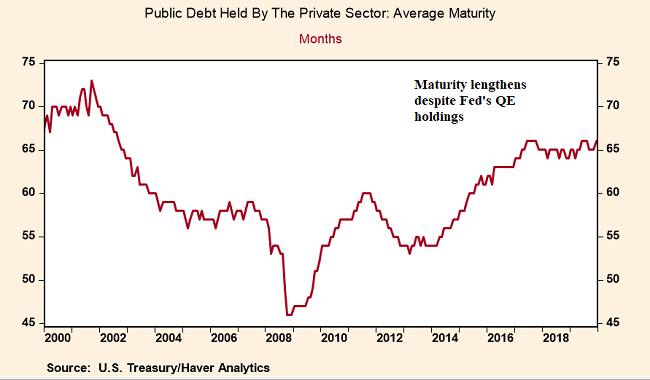 Well, a rise in rates is  hardly likely, you say. Indeed in the same volume as my perpetuities proposal, Robin Greenwood, Sam Hanson, Joshua Rudolph, and Larry Summers advocated an even shorter maturity structure. The ARM is cheaper, and they ran some situations that a rise in interest rates was unlikely given the statistical patterns of recent history.

But past history does not always continue. I buy earthquake insurance in California even though there hasn't been a really big one since 1906. The same statistical approach to risk management blows up regularly. Economists working on climate change often make the insurance argument -- sure, the conditional mean is not a catastrophic impact, but we should take out insurance that it's not much worse than we think.

A debt crisis is like the Spanish Inquisition. Nobody expects it. Alan Blinder, for example, writing in WSJ echoes this conventional wisdom,

First, at least for now, the Fed is buying as many debt securities as the Treasury is selling. On net, the investing public doesn’t have to buy any.

Wait a minute, Alan, the public does have to hold the reserves, which are just another form of government debt!

Second, the U.S. borrows in its own currency. Sovereign debt crises almost never arise in such cases.

True, but inflations do. Riots, civil wars, pandemics and coups "almost" never arise either, yet we are well advised to pay some attention. And the US has had one big debt crisis in 1972, though we borrow in our own currency and under Bretton Woods the dollar was the reserve currency. Foreigners distrusted the dollar and demanded payment in gold, which we ran out of.  (Short version). The UK had several debt/currency/inflation crises.

Third, if the U.S. Treasury starts to supply more bonds than the world’s investors demand, the markets will warn us with higher interest rates and a sagging dollar. No such yellow lights are flashing.

Did I mention that nobody expects a run? Flashing yellow lights did not warn Greece, Lehman Bros., or the US.

Fourth, interest rates on government debt in several advanced countries—notably but not only Japan—are superlow today even though their national debts are far higher, relative to gross domestic product, than seemed prudent a decade or two ago.

So AIG was in worse shape than Lehman.

Fifth, the U.S. public debt topped 100% of GDP at the end of World War II with no adverse consequences. After that peak, we managed to whittle the debt down to only 22% of GDP over the next 28 years or so. To accomplish that feat, we didn’t need to run budget surpluses year after year. We just kept deficits small enough that the debt grew slower than GDP. Which is not that hard if the interest rate remains below the economy’s growth rate—as has been true for years. 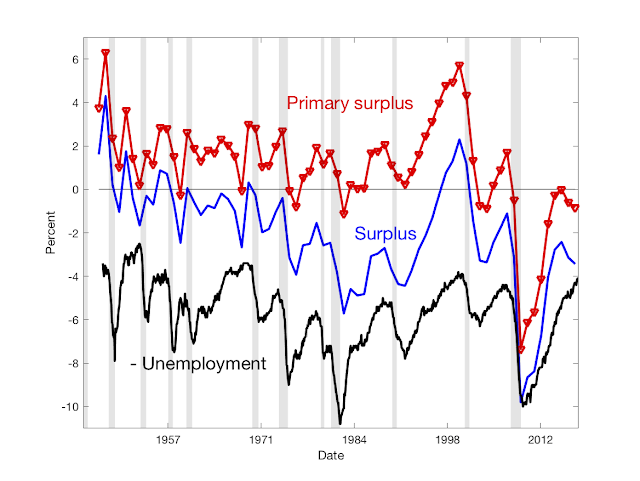 Actually, post WWII, after a quick bout of inflation that wiped out some of the real value of debt, the US ran steady primary surpluses until 1975. And had strong supply-side growth in a much less regulated economy. Let's be nice -- "keep deficits small enough" is wisdom widely overlooked around Washington.

Yes, I was worried in 2008, and the crisis hasn't happened yet. But the logic of it does not suggest  a classic near-term forecast. It could wait 10 or 20 years. We could escape with strong supply side growth, and "deficits small enough" by sensible reforms. But if it came -- doubtless in a deep recession, social unrest, perhaps war, just the sort of times that people doubt America's ability to reform itself and pay off its debt -- it would be an immense disaster.

Locking in 1% interest rates for a generation seems like a no-brainer. While markets are willing to sell us insurance at this rate, take it.

Might the short term debt issuance be a way the government is implicitly committing to not inflate the debt away. Such inflation would be much more painful than say deciding to inflate away debt with a long maturity structure?

This is a good point. The short maturity structure is much harder to inflate away. The long maturity structure means in the event of inflation, default, widening credit spreads for the US, etc., the government comes out ahead, and is thus less likely to avoid the event. Seeing the US in effect take a big bet on inflation might also scare markets a bit. It's sort of like showing up at the insurance office with a can of gasoline under one arm. Like swaps, it also raises the counterparty question. If the US issues 30 year bonds, interest rates rise, the bondholders take a huge hit. Will the US really allow that to happen? If the bondholders are big banks, pension funds, and so forth?

I think Merton Miller once suggested that Hong Kong defend a currency peg by writing a huge number of options against it, which would profit if the peg did not fall apart and ruin the country if it did.

2) In my memory of history, I can think of only one and a half times that debt to GDP greater than 100% has ended well for bondholders in the last 1000 years. The UK following the napoleonic wars is the first (funded by perpetuities, by the way). The US after WWII is the half - the inflation of 1945-46, the collapse of Bretton Woods and inflation of the early 1970s also contributed a bit. The UK following WWII was not a success. The UK grew out of the debt -- it started the industrial revolution. So both US and UK successes trace to a surge of supply-side growth, with sober fiscal management -- at least primary surpluses, as above.  We have neither going forward.  I asked some assembled economic historians for other examples. The US after the civil war came up. That's about it. I welcome other antecedents, especially ones with sclerotic growth and ever expanding deficits.