Strategic Review and Beyond: Rethinking Monetary Policy and Independence - Barokong 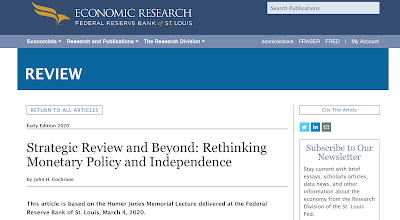 March 4, I was honored to give the Homer Jones lecture at the St. Louis Federal Reserve. Link here

Strategic Review and Beyond: Rethinking Monetary Policy and Independence.

I used the opportunity to put lots of thoughts together in condensed form, on how the Fed and other central banks should approach monetary policy, financial regulation, and ever-expanding mandates.  The link is to the html version. It will appear in prettier form in the April St. Louis Fed Review.

Should, and can, the Fed stimulate with strongly negative rates, immense QE asset purchases, and an arsenal of forward guidance speeches? I think not. What sort of target should it follow? A price-level target. The Fed should get out of the business of setting the level of nominal rates and target the price level directly. Price-level control will be much more effective with fiscal policy coordination. The Fed should offer a flat supply curve of interest-paying reserves, open basically to anyone, though the Treasury should take up much of that role directly.

Going forward, the Fed and its international counterparts should disavow the temptation toward ever-expanding mandates and economic and financial dirigisme that would take them to "macroprudential" policy, discretionary credit cycle management, asset price targeting, and exploiting regulatory power to embrace social and political goals… today on climate change and inequality, perhaps tomorrow on immigration, trade restriction, China-isolation, or whatever the smart set at Davos wants to see. Only limited scope of action to areas of agreed technocratic competence will salvage the Fed's, other central banks', and international institutions' useful independence.

Of course this effort arrives with spectacularly bad timing, as nobody is talking about anything but the Covid-19 virus. Still, life does go on, and I don't see anything that is directly contradicted by current events. And perhaps you want to read and think about something other than virus crisis, and issues we will go back to thinking about when it's all over.

In the final section (see the footnotes too) I discovered that our international institutions, BIS, IMF, FSB, and so forth were busy dragging banks into the partisan warfare over green new deal style climate policy and forced redistribution. I took a dim view of that. First of all, the idea that climate and inequality present financial risks is just fanciful. Most importantly these are political minefields that will doom independence.

I think this section holds up well. That the worthies who look in to the future and spot risks to the financial system, and drag banks into accounting for them via stress tests and regulatory accounting, found climate change and inequality the biggest run-provoking risks they could think of, not even mentioning pandemic, tells you volumes about the whole technocratic project. 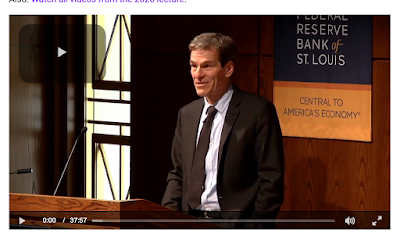 If you like to watch videos, here is the actual lecture somewhat shorter than the written version.