California, despite being a one-party state, is actively debating SB50 that would over-ride local zoning laws and allow construction of apartment buildings, especially near transit areas.

This is almost a remarkable outbreak of sanity. In a divided government, one can keep touting slogans. But when one party takes over, apparently permanently, they do have to actually govern, and eventually some reality must sink in.

Housing in California is ridiculously expensive. After California tried everything else -- "affordable housing" mandates on developers, subsidies, rent controls, public housing, and so forth -- it is finally facing the fact -- we need to just let people build. Given that California will not allow more land to be devoted to housing -- wisely, in my view -- and given that the first generation housing stock was built cheaply, using a lot of land for little house, the natural place to allow people to build is up: replace small single family houses on large lots with apartments, townhouses, or even single family houses on smaller lots.

The end result, though is saddled by a trip through the progressive sausage factory. I recommend Joe DiStephano's analysis with beautiful maps.

The first stop was rather clever: wrap it in green. "You can build" was never going to fly in California. So the original effort, SB25, restricted the effort to areas near transit. Who can object to allowing apartments near transit, so people can get out of their cars? Moreover, with this twist, SB25 put the kibosh on one standard local trick for restricting construction, requirements for lots of onsite parking.

The transit clause extends to "high quality bus corridors." Now in one sense that's great. Other than nostalgia and cuteness, and outside places like New York City, buses are much better transit options.  But one of the main reasons buses are great is that it is much easier to move a bus line than to move a rail line. You can be on a "high quality bus corridor" tomorrow.

"Jobs rich areas" are now included. Allowing people to live nearer where they work is better than any "transit" idea. That too is a little strange though. If people were allowed to build housing, jobs would locate there quickly. Housing first redevelopment is not too hard an idea.

Alas, the bus and jobs exemption only waive density and parking, and allow cities to keep height limits and other zoning restrictions. Which they will do.

Then it descends into madness, and an invitation to endless litigation.

California will write a law allowing the construction of apartment buildings, and conversion of houses to multifamily units, yet will specifically exempt the areas most obviously in need of redevelopment. Once upon a time governments granted subsidies and tax breaks for redeveloping such places. Minorities and poor people will instead be condemned to live in rotten housing and rotten neighborhoods. Heaven forbid a few apartments get built near transit stops, some yuppies move in, grocery stores and coffee shops grow to serve them, and the rest of the neighborhood.

Joe's maps tell the story. Where in LA will California allow apartments? Not in the places that need redevelopment! Perhaps if people could build apartments, these might become "jobs rich areas!" 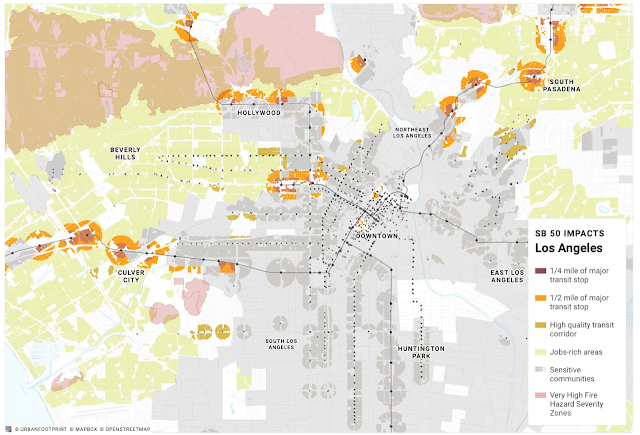 (To be fair, the state law only over rides local zoning laws. There is nothing that stops the city of LA from allowing development with or without SB50.)

As a classic example of how we got in to this mess, consider the instant reaction on the Menlo Park nextdoor.com 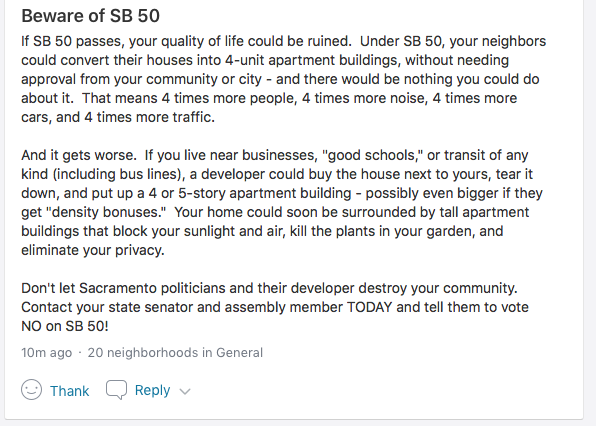 Now, if we do a little Bayesian Improved Surname Geocoding -- not perfect, but good enough for the Justice Department to sue auto dealers -- we can conclude that the author is white, wealthy, lives in a house worth at least $3 million dollars, and a reliable progressive Democrat, bleeding hearts over climate change and inequality. Yet this post is worthy of the darkest anti-immigrant keep-the-poor-out    climate-denying right-winger. All the people who rehab the $3 million single family houses to $6 million single-family houses in Menlo Park drive in from 50 miles away, as do those who mow the lawns, wait the tables and so on. The young bright kid from Fresno who might get his break working here has little hope of finding a place to live. I guess there is a lot of hypocrisy going around these days, but this is pretty glaring.

Also echoing the local zeitgeist and how-did-we-get-in-to-this-mess thoughts is the ongoing saga of the Flintstone House. NYT here, and a good article at the Guardian If you've ever driven down 280, you've seen this cool house. It was recently sold, and the new owner took up the Flintstones theme: 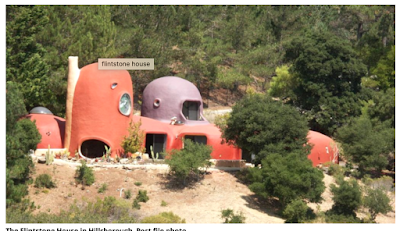 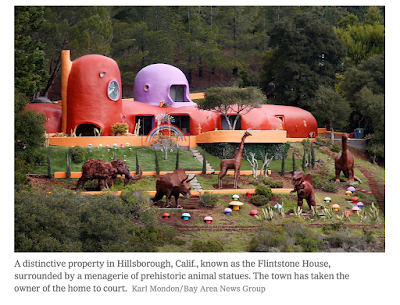 More great pictures at SF Curbed. How utterly cool, you undoubtedly think. What did the city do, make it a historic landmark to preserve it? No, the city is suing Ms. Fang, the owner, for landscaping without permits and "community input."

... the tastemakers of Hillsborough have not extended their favor to the experimental stylings of William Nicholson, the architect...It was in response to the Nicholson’s construction of the Flintstone house in 1976 that the town first established its Architecture and Design Review Board (ADRB), ... established “so there would never be another home like that built in Hillsborough”.

...Mrs Fang claims that she attempted to work with town of Hillsborough to obtain the proper permits for her landscaping work, ..she says she feels like the town is playing with her like a cat with a mouse – “play, play, play, bite, until I die” – and claims she has interacted with the town 44 times while attempting to comply. At one point, the town lawyer pressured her to paint all the mushrooms a single color, she says. “Every time I complied with their request, they moved the goalpost,” she says.

Bottom line, any residual meaning of "private property" is vanishing in California.

(I received a few comments from fellow libertarians last time I wrote about these issues. Shouldn't communities have the right to pass whatever restrictions they want? If they want to preserve a $5 million per house replica of 1950s suburbia, and wall out the unwashed masses, hypocrisy aside, why should the state stop them? I counter, this is not libertarianism, the defense of private rights, this is untrammeled majoritarianism, by which your neighbors via the city strip you of your right to sell your house to the highest bidder, do what you want with it, and strip the ambitious kid from Fresno who wants to move here of his right to be supplied by a competitive marketplace. It's also a monstrous inefficiency. A neighbor who is hurt by $500 from his dislike of looking at your property can destroy millions of value to you. Anyway, it's a longer discussion which I acknowledge here without getting in to it. )