If you want evidence that climate policy has become unhinged from science and quantification, becoming more like a religious cult, look no further than the recent Democratic presidential candidates' proposals to ban fracking immediately and nuclear power soon.

From Michael Cembalest at JP Morgan 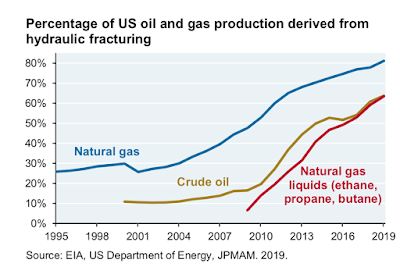 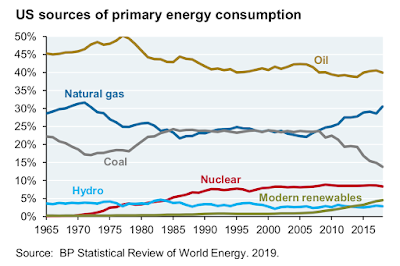 I'm not a denier. Yes, carbon is a problem, warming is a problem, and a uniform carbon tax, vast expansion of nuclear energy, more renewables, lots of R&D on them, GMO foods, and geoenginnering are solutions. (If indeed warmer weather is an existential crisis, and if indeed $2 billion of soot in the upper atmosphere solves it, that should at least be on the table.) Actual, quantitative, scientific solutions. They don't atone for our carbon sins.

A ban on fracking and nuclear are not solutions, and will raise carbon emissions.  The US is doing better on carbon reduction than other countries, because of fracking and natural gas.  Unlike Germany, who has followed these policies, we cannot rely on Eastern European coal and Russian gas.

I am delighted to see that despite my fears of how extensive discretionary regulation will silence dissent, Mr Cembalest can still write such a note, with the JP Morgan imprimatur. We'll see how long such heresy  survives more intense financial regulation and "stakeholder" control of corporate boards.   "Eco-authoriarianism" and a "coercive green new  deal"  are already openly advocated, here for example.