Family formation and crime is the title  of  a very nice new paper by Maxim Massenkoff and Evan K. Rose. (HT Alex Tabarrok atMarginal  Revolution, which also has great commentary.)

The graphs speak for themselves. Go to the paper to look at them all. A few select ones:

Arrests fall by half, starting when mothers know they are pregnant: 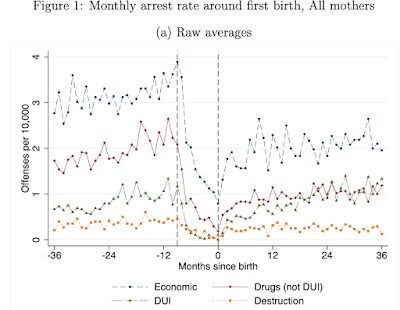 (The paper presents  more  accurate but less interpretable event study coefficients.  If you know what that means, go look at  the paper.) 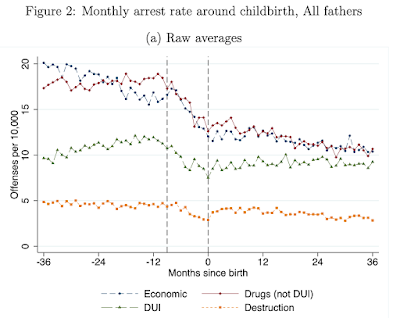 The decline is especially steep among unmarried mothers: 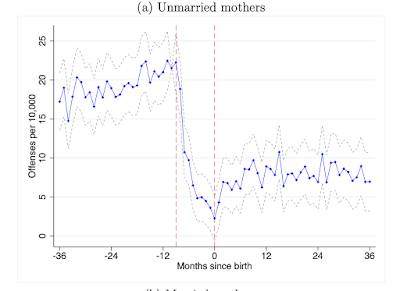 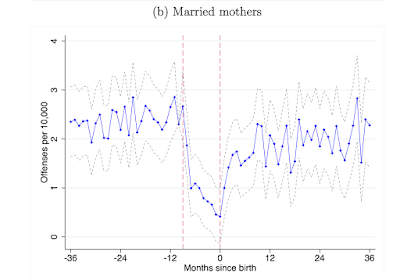 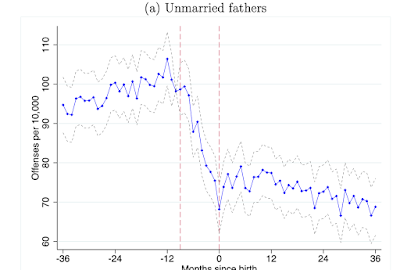 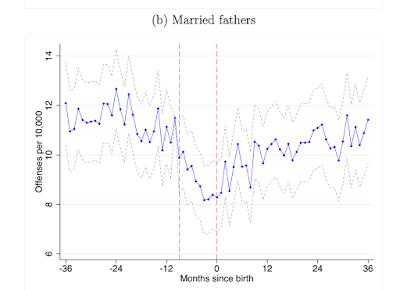 There is a stereotype that unmarried fathers aren't taking it seriously. It appears that is wrong.  This is the biggest news to me. 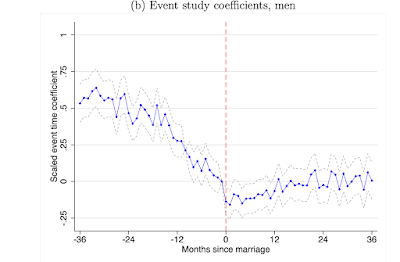 And, sadly, the process is reversible. Men whose marriages don't last also fall back to bad habits. (And vice versa.) 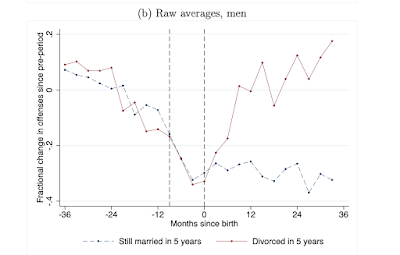 Obviously, we should not jump to  silly causal interpretations. No, forcing women to have children will not bring down crime.  But use some common sense. These graphs quantify an important set of choices people make around large events in life. The news of a child coming provokes some reflections and behavior changes -- let's just call it growing up.

As far as crime, these numbers are huge. To ignore them is, well, criminal. As with coal, China and climate, this is another unmentioned elephant in the room.

... these results show that crime isn’t simply a product of family background, poverty and neglect. Crime is a choice.

In Doing the Best I Can: Fatherhood in the Inner City, Edin and Nelson relay the following anecdote (quoted in Massenkoff and Rose):

"Upon hearing the news that the woman they are “with” is expecting, men such as Byron are suddenly transformed. This part-time cab driver and sometime weed dealer almost immediately secured a city job in the sanitation department (p. 36)."

Byron chose to change and he did so based on the rational expectation of a future event.  Massnekoff’s and Rose show that these choices are common.

In short, stop using passive voice -- criminal-justice involved, marginalized, underserved -- which is as patronizing as it is false.

The left tends to think of  every individual as relating only to the state -- the infamous "life of Julia."  Libertarians sometimes too often regard people as atomistic as well, though with a less benevolent relationship to the state. But our species is most distinctive as social animals. Family and friends matter.

Lifestyle choices are immense. It's often pointed out that if you 1) finish high  school 2) get a job 3) get married 4)  have children and 5) stay married, you are highly unlikely to be poor in America today, or criminal. Yes, not all is choice. But it isn't genetically programmed either. And if you believe in social determinism, well, then, fixing the social network to produce these choices ought to be pretty high on the agenda.

I spend a lot of time in debates that start with "inequality," and, once we figure out that whether internet moguls fly private or not makes little difference on the bottom end, we end with hand wringing about what the government can do to help provide opportunity to those stuck on the lower end of the spectrum. We talk about atrocious schools, say, and whether parent choice or rivers of money are the answer. We talk about obstacles to mobility, say, and whether getting out of the way (occupational licenses, zoning, social program disincentives) or targeted new programs (the 152nd job training program) are the right answer.

We don't talk often enough about the social elephant in the room. Among high income, progressive, economists and policy wonks, all of whom 1) finish graduate school 2) get jobs 3) get married 4) have children 5) stay married and 6)  eat healthy,  exercise, don't do drugs, and drink less and less, it is unfashionable to mention these social and family elephants in the room, and just how much the life choices of people in trouble differ from our own.

I was influenced in these things by a splendid article by George Akerlof, Janet Yellen, and Michael Katz, "An analysis of out-of-wedlock childbearing in the United States." One can hardly accuse them of being conservatives. Yet here are some choice quotes:

...Until the early 1970s it was the norm in premarital sexual relations that the partners would marry in the event of pregnancy. The disappearance of this custom has been a major contributor to the increase in the out-of-wedlock birth ratio.

...if the fraction of premaritally conceived births resolved by marriage had been the same from 1985 to 1989 as it had been over the comparable period twenty years earlier, the increase in the white out-of- wedlock birth ratio would have been only a quarter as high, and the black increase would have been only two-fifths as high.

They relate a similar anecdote.

Rubin [1969], who studied working-class whites in San Francisco in the late 1960s, found that courtship was brief and quite likely to involve sexual activity. In the event of pregnancy, marriage occurred. One of her subjects expressed the matter succinctly and with the absence of doubt with which many social customs are unquestionably observed: "If a girl gets pregnant you married her. There wasn't no choice. So I married her."

If you've seen "Grease," you have a window into these odd customs of a bygone era. Akerlof, Yellen and Katz were willing to say, in print, that despite the great benefit abortion and birth control have had, they also worsened the fate of working-class women who wanted children and husbands.

Before you go jumping to conclusions, they conclude, correctly.

attempts to turn the technology clock backward by denying women access to abortion and contra- ception is probably not possible, and even if it were possible, it would almost surely be both undesirable and counterproductive. ...such measures could lead to yet greater poverty. In the new equilibrium in which sexual abstinence is rare and the stigma of out-of-wedlock motherhood is small, denial of access would probably increase the number of children born out of wedlock and reared in impoverished single-parent families.

Shall we talk about inequality, poor kids who start life at the back of the pack, lack of opportunity, lack of income mobility? Let's just mention this somewhere in the long debates about redistribution: 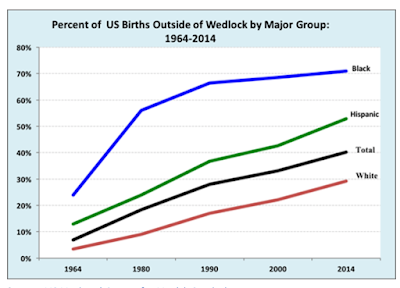