Jeff Clemens offers a "roadmap for navigating recent research" on minimum wages in a nice CATO policy analysis.  A review and a doubt.

He discusses the recent claims that minimum wages don't hurt low-skilled people. This is an impressive and readable account of a vast literature. It's not as easy as it seems to evaluate cause and effect in economics.  Evidence from small increases in the minimum wage over short time intervals in some locations in good economic times may not tell you the effects of large increases over longer time intervals in all locations in bad economic times.

The "new conventional wisdom," of small effects, Jeff reports, ignores a lot of the more recent work, and especially work that  uses "data from individual-level administrative records" rather than "aggregate data and survey data," work that runs "experiments whenever possible," and work that "transparently analyzes compact historical episodes in the U.S. experience" (P. 8)

(The "transparency" issue is one that Jeff only touches superficially but I sense an important detailed critique that needs to be written.)

Economics has become more empirical lately, and that's a good thing. But "facts without logic" pose a conundrum. Either the facts or the logic are wrong. Good for science, but one might want vast public policies with the possibility of unintended consequences to ruin a lot of people's lives to wait for facts and logic to be reconciled. Jeff runs through the arguments why large permanent increases in the minimum wage might not hurt, and finds them wanting.

An under-appreciated point: work is far more than just I work, you pay me:

"the details of employees’ schedules, perks, fringe benefits, and the organization of the workplace are central to firms’ management of both their costs and productivity. "

Employers can react to a minimum wage not by cutting back workers, but by selecting better workers, denying fringe benefits, making you pay for uniforms, insisting on schedules that are inconvenient for you but convenient for them, insisting you be on call at all times for example, and so forth. Since we don't have data on these adjustments,

empirical evidence will tend to understate the minimum wage’s negative effects and overstate its benefits.

A second effect, which Jeff doesn't mention: Which workers get the jobs will change. Workers who can adapt to inflexible schedules, don't need benefits, are well trained, get the jobs. Economic policy discussion too often takes the average as example and assumes each person is just like the average. The economy is all about how people jobs and businesses are different - "heterogeneity" and "selection" in economic parlance.

But let me express a doubt. Why do we discuss minimum wages so much? I think they irritate free-market economists because they are such a clear, simple, and paradigmatic stupid idea. The first insight of your Econ 101 class is that price controls destroy markets: 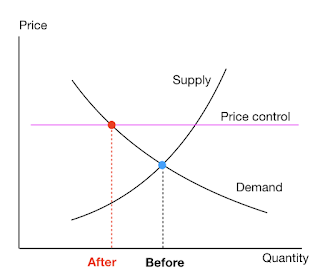 We see it over and over again, in centuries of experience boiled down to this simple graph. Price controls, rent controls, wage controls all have led over and over again to the same sorry story. And when supply is greater than demand, who gets the good, apartment, or job gets all screwed up.  Don't try to transfer income by screwing up prices. Along with tariffs and disincentives of 100% marginal tax rates, there isn't much more essential to the basic canon of economics.

So, if you're a young ambitious economist, and you want to attract a lot of attention, what could be better than empirical work showing magic: Wait, minimum wages don't hurt employment! Hooray, all the old fogies are wrong! If you are an activist, annoyed by the neoliberal orthodoxy, it's catnip. Hooray, the government can go ahead and control prices and thereby transfer incomes!

And if you're a regular economist, nothing could be more annoying.

So we pay a lot of attention and generate a lot of controversy.

But here is my doubt. Let us line up a list of economic circumstances and government policies that are potentially hurting disadvantaged Americans:

I could go on. I'll allow "wave of cheap imports from China and floods of low skilled immigrants," from the right, and perhaps "growing monopoly of the huge companies" from the left, even though I think both are silly. Add all the travails facing the kind of people affected by minimum wages you can think of.

What I would like to see, then, is some sense of priorities. Which of these is really hurting people the most? As you can tell I have a hunch that minimum wages are a problem, sure, a particularly clear pathology, sure, a particularly annoying piece of economic ignorance, sure, but that by focusing on them we really aren't focusing on the biggest problems holding many Americans back. We all want to help Americans with low skills and (currently) low incomes to get ahead. (It would be nice if the left acknowledged that occasionally.) But I'm not sure that allowing them to keep working at $9 an hour is the most important step in that direction, or that a $15 per hour minimum (legal!) wage will be the greatest sin of the many things our government does to hold people back.

Update: Jonathan Meer points me to a lovely essay by Tom Leonard, making this point more eloquently than I. No idea is genuinely new I guess! It's not a fight about how to help poor people. It's a fight about economics and the poor people are (as usual) the sorry victims of intellectual warfare:

Minimum-wage effects, at least for current U.S. magnitudes, are small potatoes. Of several more important policy concerns—entitlement reform, health insurance, CPI calculation, for example—none has generated anything like the vituperation that has characterized the minimum-wage controversy. But if the minimum-wage controversy is not especially important to the economy, it is very important to economics, and, thereby, to the status of economics as a policy science.

The reason, I want to argue, is that the core of modern economics— neoclassical price theory—is seen to be at stake. In particular, minimum- wage research has come to be seen as a test of the applicability of neoclassical price theory to the determination of wages and employment. The modern minimum-wage controversy is not just a technical quarrel over the sign and magnitude of wage-elasticity coefficients; it is the latest chapter in a longstanding methodological dispute over whether and in what domains neoclassical price theory can be said to properly apply.

His footnotes are even great

1. In the wake of Card and Krueger 1995, one Nobel laureate intoned, “I tremble for my profession” (Miller 1996). Another made reference to “camp-following whores” (Buchanan 1996). A third eminence called Card and Krueger’s main interlocutors, David Neumark and William Wascher, “heroes” (Barro 1996).

This is the kind of history of economic ideas I wish we had more of.