The graph is federal surplus (up) or deficit (down), not counting interest costs, divided by potential GDP. I made it for another purpose, but it is interesting in these fiscally ... interesting .. times.

Taking interest costs out is a way of assessing overall fiscal stability. If you pay the interest on your credit card, the balance won't grow over time. Granted, interest costs are increasing -- 5% times a 100% debt/GDP ratio is a lot more than 5% times a 30% debt/GDP ratio, and interest costs threaten to crowd out much of the rest of the budget if interest rates go up. But still, as an overall measure of fiscal solvency, whether one way or another you are paying interest and then slowly working down debt, or if you are not even making the interest payments and the balance is growing over time,  is the relevant measure.

I divided by potential rather than actual GDP so that we would focus on the deficits, and not see variation induced by GDP. If GDP falls, then it makes deficit/GDP larger. The point is to detrend and scale deficits by some measure of our long-run ability to pay them. Yes, deficits after 2008 are even larger as a fraction of actual rather than potential GDP. So this is the conservative choice.

Now, comments on the graph. Once you net out interest costs, it is interesting how sober US fiscal policy actually has been over the years. In economic good times, we run primary surpluses. The impression that the US is always running deficits is primarily because of interest costs. Even the notorious "Reagan deficits" were primarily payments, occasioned by the huge spike in interest rates, on outstanding debt. On a tax minus expenditure basis, not much unusual was going on especially considering it was the bottom of the (then) worst recession since WWII. Only in the extreme of 1976, 1982, and 2002, in with steep recessions and in the later case war did we touch any primary deficits, and then pretty swiftly returned to surpluses.

Until 2008. The last 10 years really have been an anomaly in US fiscal policy. One may say that the huge recession demanded huge fiscal stimulus, or one may think $10 trillion in debt was wasted. In either case, what we just went through was huge.

And in the last data point, 2017, we are sliding again into territory only seen in severe recessions. That too is unusual.

Disclaimer: All of these measures are pretty bad. Surplus/deficit has lots of questionable reporting in it, and the interest cost only has explicit coupon payments. I thought it better here to show you how the easily available common numbers work than to get into a big measurement exercise. I'll be doing that later for the project that produced this graph, and may update.

Update: Sometimes a blog post makes a small point that can easily be misinterpreted in the broader context. So it is here.

The US fiscal situation is dire. The debt is now $20 trillion, larger as a fraction of GDP than any time since the end of WWII. Moreover, the promises our government has made to social security, medicare, medicaid, pensions and other entitlement programs far exceeds any projection of revenue. Jeff Miron wrote to chide me gently for apparently implying the opposite, which is certainly not my intent. One graph from his excellent "US Fiscal Imbalance Over Time": 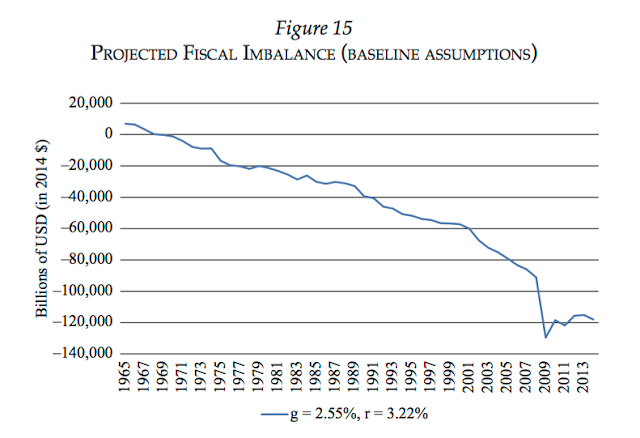 Here, Jeff adds up the promises made each year for spending over the next 75 years. Others, including Larry Kotlikoff, make the same point by discounting the future payments, to estimate that the actual debt -- the present value of what the US owes less what it will take in --  is between $75 trillion and $200 trillion -- much more than the $20 trillion of actual GDP.

I've been one of those guys wandering around with a sign "the debt crisis is coming" so long that I forget to reiterate the point on occasion, and Jeff rightly points out my graph taken alone could be so misinterpreted.

In a nutshell, the problem is this: The US has accumulated a huge debt. Interest costs on that debt are already in the hundreds of billions per year. If interest rates rise, those costs will rise more. $20 trillion of debt times 5% interest rate is $1 trillion extra deficit, or even faster-rising debt. Unlike the case after WWII, when the spending was in the past, the US has also promised huge amount of spending in the future.

And, as Jeff points out, this did not start in 2008.  Entitlements have grown and crowded out regular spending. Now they are growing to crowd out interest payments. Soon they will grow more.

Debt /  GDP.  (Thanks Vic Volpe for suggesting this better graph.)