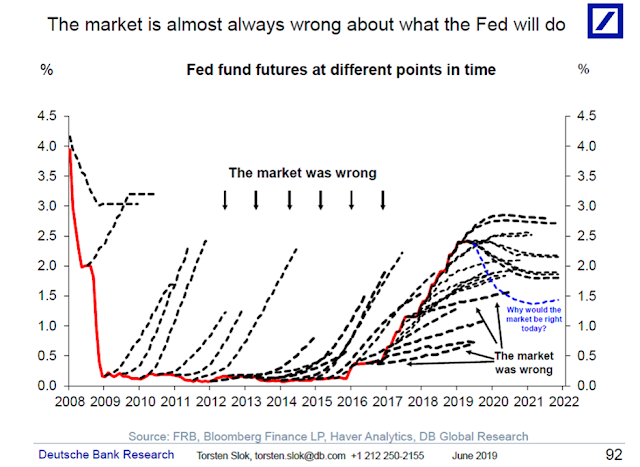 Torsten Slok at DB updates this lovely graph on occasion. Here's what it means. Fed fund futures are essentially bets on where the Federal funds rate will be at various points in the future. Thus, you can read from the dashed lines the market's guess about where the federal funds rate will go -- assuming that the bets are priced to have an even chance of winning or losing.

Reading it that way, the market was systematically wrong from 2009 to 2016. It's something like springtime in Chicago -- this week, 40 degrees and raining. Next week, 75 and sunny. Week after week after week. In 2017, the market finally changed expectations to say, no, fed funds rates are not rising -- just in time to miss the actual rise in federal funds. Now, as in the blue line, market forecasts say there will be a big decline. But, as Torsten points out, why would the market be right today?

So what does this graph mean? Are market practitioners really that dumb? After all, there is a lot of money to be made here. When the graph is upward sloping -- as the entire yield curve was upward sloping from 2009-2016 -- and so long as rates don't rise, you can make a fortune borrowing short and lending long. And vice versa. In short, the difference between forward rate (right end of dashed lines) and spot rate (current fed funds rate) does a lousy job of forecasting where the spot rate will go -- and thus, mechanically, is a good signal of the extra return, positive or  (lately) negative you will get by holding long-term bonds.

The pattern is actually widespread and longstanding. Starting in the late 70s and early 1980s, Gene Fama wrote a series of papers on it, short term bonds, money markets, foreign exchange,  and (a favorite of mine)long term bonds (with Rob Bliss).Campbell and Shiller also found it in long term bonds, whichMonika Piazzesi and I extended.Piazzesi and Swanson show the pattern in federal funds futures.

There are three potential stories:

One: the market is dumb. People are dumb. Well, that's a nice story that can "explain" just about anything. But if you're so smart why are you not rich. Behavioral finance isn't that empty, and searches for common patterns in dumbness. However this graph is the opposite of the usual behavioral claim, extrapolative expectations, excess belief in momentum.  If there is a rejectable hypothesis in behavioral finance, this graph seems to reject it. (I welcome corrections to that statement in the comments.)

Two: there is a risk premium and it varies over time. For most of 2009-2015, the economy was depressed. People needed a good promised return, a coin more than 50/50, to hold the risk of long term bonds.  Once we exit the recession, the opposite pattern holds. Long term bonds should pay less than short term bonds, and maybe now the yield curve is finally waking up to that pattern. Naturally, I'm attracted to this story, but I admit it's a bit strained late in the upslope period.

Three: exit and entry to recessions is something like a rare event, a Poisson process. Such a process is like computer failure. The chance of the event is always the same, and does not increase as the length of time goes by. Recovery could happen any time. In a second paper that's what Piazzesi and I seemed to find for this pattern in bond markets. The market forecasts are right, in fact, and we just got 7 tails in a row. That is a speculative idea, and needs quantification.

Whatever the story, here is the fact: futures prices are not good forecasts (true-measure conditional means) of where interest rates are going. That fact is true not just of Fed Funds futures, but interest rates in general.

Torsten sends along an updated chart, going further back in history. 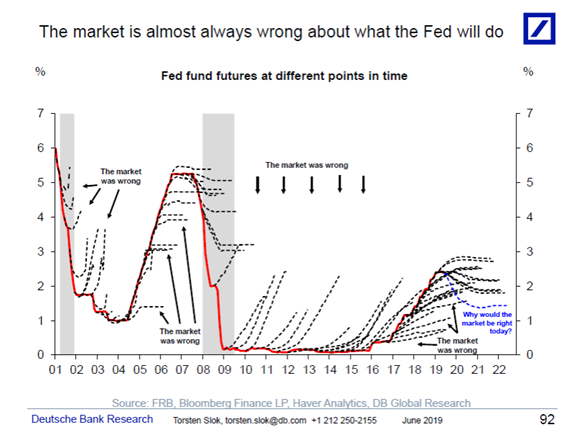