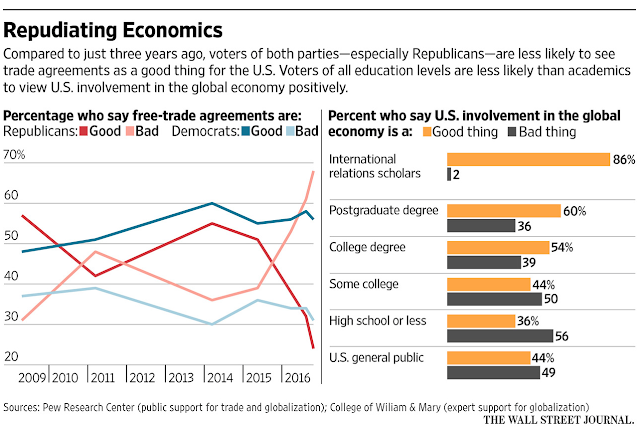 The question is this: Should we understand politicians as assembling coalitions of voters with fixed policy preferences? Or should we instead regard politicians as leaders, who give voice to general dissatisfaction, and their followers picking up ideas?

Most political analysis takes the former view. People are mad about China, the TPP, immigrants, or whatever, and Trump comes along, listens, and represents these preferences, and wins. Easy models of political preference put preexisting policy views on a line, and then think about where leaders choose to place themselves.

The article echoed the common view too

Surveys from the Pew Research Center have documented dwindling support for free trade. In 2014, 60% of Democratic voters and 55% of Republican voters supported such trade agreements. In an October survey, however, support among Democrats had fallen to 56% and support among Republicans had nose-dived to 24%.

I'm coming to a different view. Yes, people are unhappy. But the average American is busy with a real life, and doesn't think a whole lot about cause and effect in public policy. How many have read NAFTA or the TPP, or have any idea what's inside?  How many have thought about automation vs. regulation vs. trade as the source of industrial decline?

It seems to me the ideas come from the leader, giving voice to their voter's frustrations. Policy views then become general signals of team allegiance. Witness how many Trump supporters, interviewed, supported him despite not because of policy stances.

And witness the graph. How could it possibly be that in two years, opinions on the value of free trade among Republicans dropped by half, while virtually unchanged among Democrats? Surely, this is not a change of view independent of candidates, that Mr. Trump was just quicker to recognize. Surely, this represents the opposite -- candidates, especially Mr. Trump but also many of the others, denounce trade, and followers follow.

The good news is that ideas held lightly and as a badge of support can more easily change.   And other leaders can channel the same discontents to more profitable analysis of our country's problems.