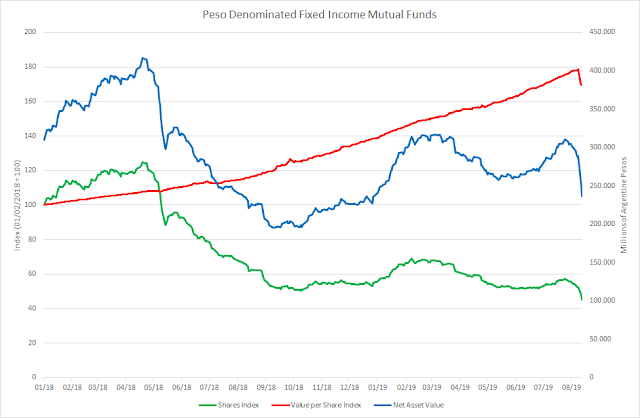 "This  graph shows the evolution of peso denominated fixed income mutual funds. On Monday (after the elections) this funds suffered withdrawals of 6% of the total shares. Net assets fell by more as prices plummeted (-5%). On Tuesday, shares fell by 6% again but prices remained constant. On Monday, Money Market funds suffered withdrawals (drop in shares) of 16% although they didn't break the buck (on average). "

I gather from other discussions that Argentinians are trying to move assets fast to dollars. That is consistent with this drop in Peso denominated fund assets. (Though of course for every seller there is a buyer -- I wonder who the private parties (non funds) are that are buying Peso fixed income assets!)

There is an interesting dynamic here. The chance of a new regime with terrible economic policies rises. It causes a rush to dollars. People suspect that the new regime will impose capital controls.  The  government has trouble rolling over its own currency debt, as interest rates rise. That makes the fiscal situation worse.