Mind the Gap is an extraordinary blog post on land use regulations. (HT the dependably excellent Marginal Revolution.) It is great for its detail, but most of all for its fresh voice. Sure, send one of my free-market economist friends in to examine the pathologies of any city, and we start almost reflexively on land use regulations. But the author is clearly from a different background -- the sort of person who "was in Hamtramck, Michigan a couple of years ago to participate in a seminar about reactivating neighborhoods." Lessons discovered the hard way, from different backgrounds, are often the freshest.

The big point of the blog post is how land use regulations force a steppingstone pattern of urban decay. It's hopelessly expensive to convert any building "up" the economic foodchain of uses, so bit by bit buildings get used for less and less productive uses, that don't attract the attention of regulators, until they become vacant lots, or until a large commercial developer can come in, demand tax subsidies, and rebuild the whole neighborhood.

The post starts with the story of a family that

bought an old fire station a few years ago with the intention of turning it in to a Portuguese bakery and brew pub.

Mandatory parking requirements, sidewalks, curb cuts, fire lanes, on site stormwater management, handicapped accessibility, draught tolerant native plantings… It’s a very long list that totaled $340,000 worth of work. They only paid $245,000 for the entire property. And that’s before they even started bringing the building itself up to code for their intended use. Guess what? They decided not to open the bakery or brewery. Big surprise.

the space has been pressed in to service as a printing shop for the family’s specialty advertising business. It’s a productive and profitable use of the existing space that doesn’t require structural changes or special regulatory approval. But it’s significantly lower down on the economic food chain, creates less taxable revenue, employs far fewer people, and does nothing to activate the town’s social or cultural life. And if anything were to happen to the building it wouldn’t be cost effective to rebuild so the lot would most likely remain vacant. There are plenty of empty parcels all around that attest to this reality.

Individually it’s impossible to argue against each of the particulars. Do you really want to deprive people in wheelchairs of the basic civil right of public accommodation? Do you really want the place to catch fire and burn? Do you want a barren landscape that’s bereft of vegetation?

Here I think the blog missed the central problem -- understandable since it's not from an economist. "you" -- we, the town, really does want these things. These are important, and desired, public goods. The problem is, these things we want cost a lot of money. $340,000 for one firehouse. The town wants them, but is not willing to raise general taxes to pay for them.  It's sane enough to realize that it cannot make owners of existing properties fork over $340,000 per firehouse. So it passes, what is in essence, a lump-sum tax on people who want to start new businesses, or use the property up the economic foodchain. Alas, the people second-most-unlikely to be willing or able to pay such taxes are small-scale entrepreneurs trying to start a marginally better business in a run down neighborhood.  So nothing happens until either the town reverts to wasteland, or until nearby prospects brighten enough that a large commercial developer can move it back to the top of the food chain, and also extract enough tax breaks so that in essence the city does pay for the public goods from general taxes in the first place.

The post though, is about this big lesson in urban decay:

There is zero chance that any of these laws and procedures will be changed in my lifetime. However, it’s highly likely that before I die this gas station will close and the property will work its way down to a series of lesser uses until it remains vacant....And before I shuffle off this mortal coil the cost of maintaining the road and associated sewer and water infrastructure will outstrip this town’s tax revenue.

(The post also emphasizes the dehumanizing aspect of parking and street regulations.)

Another example, on trying to convert an old bank to new uses,

the fire marshal happened to drive by and noticed there were people – a few dozen actual humans – occupying a commercial building in broad daylight. In a town that has seen decades of depopulation and disinvestment this was an odd sight. And he was worried. Do people have permission for this kind of activity? Had there been an inspection? Was a permit issued? Is everything insured? ...

There was already a kitchen in the back of the building from when the place had been a Chinese restaurant. But the current rules required a long list of upgrades including a $20,000 fire suppressing hood for the stove and new ADA compliant bathrooms. It could all be done, but at a price point that would grossly exceed both the purchase price of the building and any conceivable cash flow the business might generate.

One work-around was to have a certified and inspected food truck park in the back alley and deliver food into the building for temporary events. ADA portable toilets could be rented as needed. The building – now called Bank Suey – has continued along these lines as a rental hall for pop up events..

Clearly a move down the economic food chain. Cell phone antennas on the roof of a neighboring empty building are the next example. 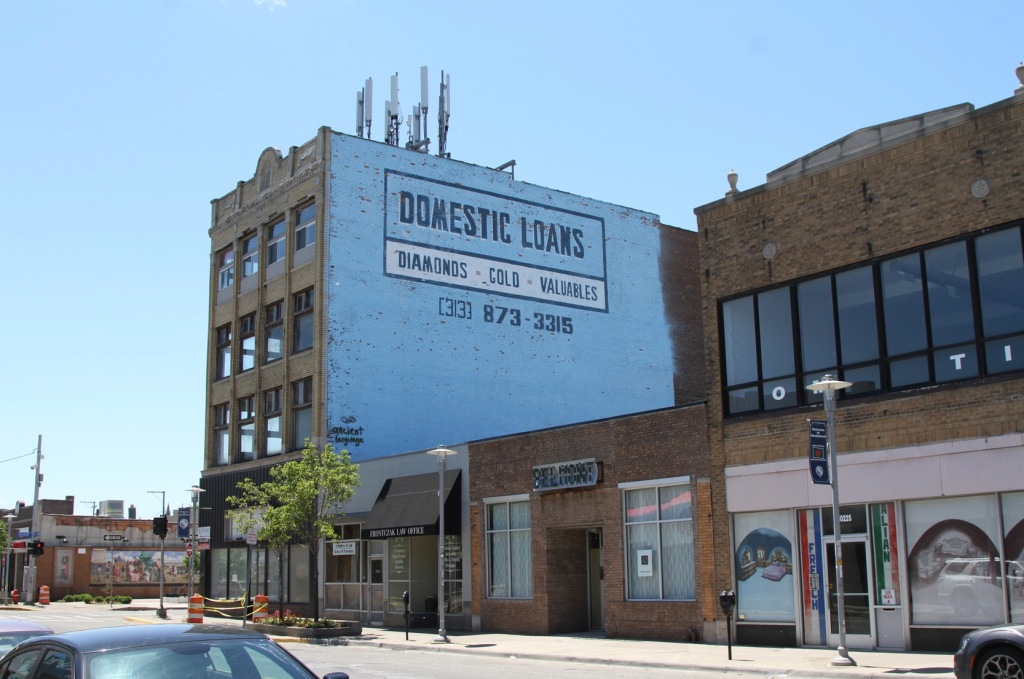 Our author has learned an important lesson.

On a walking tour of town officials and development consultants pointed to empty buildings and described all the things that could be done to bring them back to productive activity: open up the blank walls and re-install windows, incubate all kinds of new businesses, paint, outdoor seating… I rolled my eyes. None of those things make any economic sense given the regulatory hurdles involved and the likely negative return on the up front investment

The pattern instead, and the bottom line:

anonymous blank inscrutable structures ... could quietly contain storage facilities or a non retail live/work space under-the-radar without attracting the attention of officialdom. If the inhabitants were really discrete they might be able to carry on unmolested for a number of years.

Meanwhile the usual big money developers might buy enough of the neighboring buildings and vacant land – with the accompanying subsidies and tax breaks – to rapidly transform Main Street at a much higher economic level.

There’s no in-between. You either get permanent stagnation or massive redevelopment. Baby steps are essentially illegal.