I've been remiss about blogging lately while I finished two new papers, "The Fiscal Roots of Inflation," and "The Value of Government Debt." I'm posting here for those who might  be interested, and I appreciate  comments.

Both papers apply asset pricing variance decompositions to questions of government finance and inflation. The inflation paper is  part of the long-running fiscal theory of the price level project. (Note: this post uses MathJax which may not show properly on all devices.)

I start by deriving an analogue to the Campbell-Shiller linearization of the return identity:

I run a VAR and calculate the terms on the right, which are simply sums of impulse-response functions. If you follow asset pricing, you will not be surprised at the first main result: Discount rates matter a lot. Changes in the present value of surpluses are driven in large part by changes in the discount rate rather than by changes in expected surpluses.

I do this as part of a program to apply fiscal theory ideas to data. It's always been a challenge to link inflation to movements in surpluses. It turns out we can do so -- future surpluses do matter in this decomposition. But discount rates matter too, and empirical work both pro and con fiscal theory has largely ignored those.

(Nothing in this empirical work needs fiscal theory however. These are identities that hold in every model in which the government faces a budget constraint. You can read them as measures of just how "passive" fiscal policy is achieved, which is important to closing out conventional models. Footnotes about lump-sum taxes are nice, but we don't have any. That discount rates move to make the present value identity hold is news there too.)

A peek at some results: I use the great market value of debt data from Hall and Sargent. I ran a VAR. Here is the response function to an unexpected 1% inflation. I let all the other variables move contemporaneously. Inflation is not a "shock," it responds to changes in expectations of all the other variables, and the "responses" are the changes in expectations that correspond to (cause in the fiscal theory view) the inflation shock.

In terms of the inflation decomposition, the 1% unexpected inflation does correspond to deficits. But those deficits turn around to  eventual surpluses, and the sum of all surpluses is essentially zero. "r-g" is the total discount rate term, nominal return, less inflation, less growth. The cumulative discount rate term is 1.17 -- accounting for all the inflation and more. In sum, then, the 1% inflation shock corresponds to a 1.17% rise in discount rate, a 0.06% decline in surpluses. That's too much decline in present value of the debt, so we see a 0.23% decline in current bond value, the \(r^n-g\) response  in  the graph and the first term of the decomposition. That turns out largely to come from expected inflation. The rise in expected inflation -- the slow AR(1) response in the graph causes expected future interest rates to rise, and thus pushes down the bond price immediately.

One more. These inflation shocks are, on average, stagflationary. They come with a decline  in GDP, which you can see in the above graph by the decline in surplus, which is pro cyclical. The average Phillips Curve is upward sloping, more inflation with more unemployment, in the postwar period. I wanted to understand a recession-related disinflation like 2008. Every time I give a fiscal theory  seminar, the question comes up: What about 2008? The economy tanks, inflation goes way down, but there are huge deficits. Shouldn't that mean more inflation, not less? Well, not necessarily. Inflation responds to the  present value of all future surpluses. It's  unlikely there was good surplus news in 2008, but interest rates declined sharply.  So the present value of surpluses could  rise, causing disinflation, even if surpluses themselves do not. 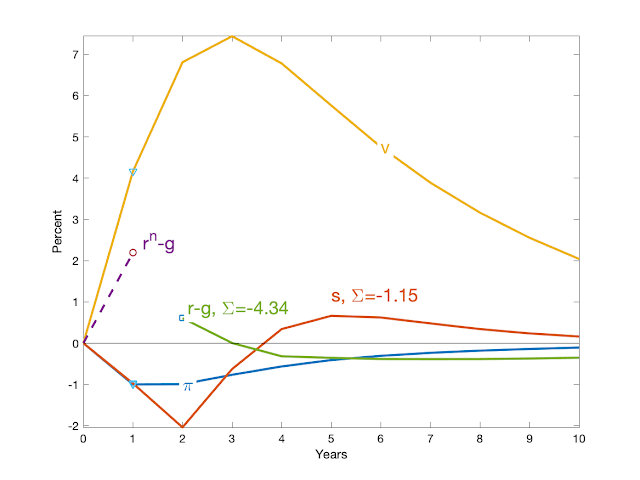 Surpluses go down -- there are big and persistent deficits in a recession. Surpluses then turn positive, and do pay off some of the accumulated debt. But not enough -- for future surpluses to account for 1% disinflation, we should see a +1% rise in cumulative surpluses, and it's -1.15%. Given surpluses alone, yes, there should be 1.15% inflation in this recession. But interest rates fall sharply, so after 1 period, \(r-g\) falls. The cumulative discount rate effect raises the present value of debt by 4.34%! There should now be 4.34-1.15 = 3.19% deflation!  Where does the extra go? Well, the  fall in rates means there is a 1 period rise in bond prices, so the  \(r^n-g\) term is  large. And in turn that reflects  the  very persistent low inflation.

There's much more in the paper, including  detailed analysis of these, and monetary  and fiscal policy shocks.  Section 2.3 lays out a "fiscal theory of monetary policy" model  that I hope will  be particularly useful. It aspires  to be a  counterpart to the standard 3 equation new Keynesian model. It includes surpluses that seem to respond to values of the  debt, putting to rest many criticisms that such responses indicate  passive policy, which they  do  not.