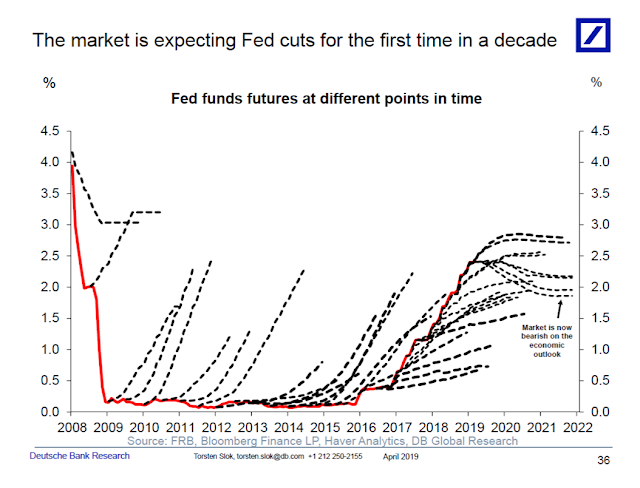 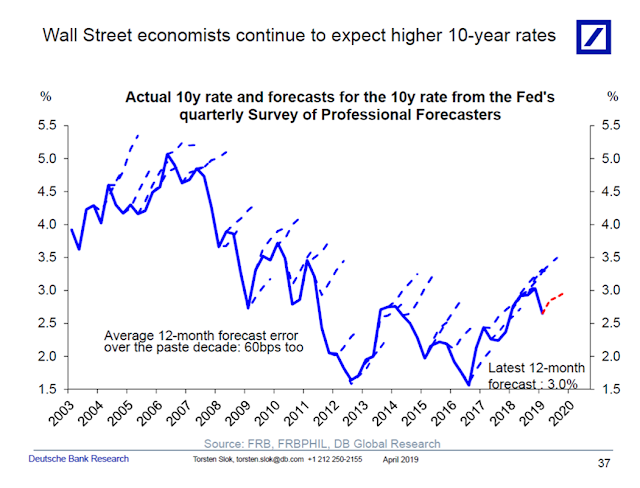 The titles seem a little off. Yes, the market is expecting rate cuts (forward rate) but the market has been exactly wrong about everything for 10 years (and longer) first forecasting the recovery that never came, then forecasting much slower interest rate rises than actually happened.  Survey expectations seem to match the forward curves well except perhaps at the very end.

Mechanically, a rising forward curve and rates that never rise means you earn a lot of money in long term bonds. It's a "risk premium" Monika Piazzesi and Eric Swanson point out this pattern is common. The same pattern holds in longer term bonds, as well known since Fama and Bliss. An upward sloping term structure indicates higher expected returns on long term bonds, and vice versa. And it makes some sense. In recessions, people don't want to hold risks, so we expect a premium for riskier assets. In booms, as interest rates rise, people are more willing to take risks.

Still it's unsettling for lots of reasons. Why did the forward curve suddenly flatten exactly when interest rates finally took off? Another interpretation is something like a Poisson process in the end of recessions, in which the chance of fast recovery is independent of how long you've been in a recession, rather than arriving slowly and predictably. That makes it rational to continue these expectations persist despite continual disappointment, and to change forecast quickly once the long-awaited fast growth arrives.