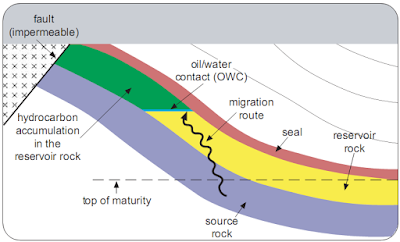 Petroleum system starts with the deposition to storage from where the production is obtained.

Petroleum system journey starts with the deposition of organic matter.

The deposition of organic matter starts when organism starts to die and deposits deep down the ocean floor and the above deposition of clay (finer grains). The clay particles are about 1/256 mm size and is called shale. Organic matter deposited on the ocean floor cannot be oxidized due to the depth factor so they can produce hydrocarbon. Hydrocarbon generation needs the cooking of organic matter at high temperature and pressure and it is obtained when it goes into overburden of deposition by clay particles and greater depths.

In the petroleum system the source rock are the shale (clay that goes under high pressure and temperature which cooks the organic matter). Sometimes limestone can also be the source rock with 1% of organic matter contains. So theses rocks undergo cooking where the temperature and pressure determines what type of fuel will be generated. Despite of temperature and pressure another factor in producing hydrocarbon is the time span required to generate fuel. The time is a critical factor as if the organic matter is cooked for less time it will not generate hydrocarbon and when it is greater than the oil produce will be converted into gas.

Reservoir as indicated by the name reserves of hydrocarbon. the hydrocarbon cannot be obtained from the source rock because of the higher pores but are lesser to none interconnection. For the extraction the pores should be interconnected so that it can travel when are extracted. But if there is no reservoir and obtaining fuel from source rock it must be fractured for permeability generation. Reservoir rock are mostly sandstone which have higher porosity and permeability but in some cases limestone also serves as reservoir rock. Limestone all by self is not a good reservoir due to fine particles present which give less permeability but as limestone is calcium carbonate so it can be dissolved in water which are the Karst topography. Only then can limestone have permeability required for hydrocarbon to be obtained.

Trap or seal rocks are those that are present above reservoir rocks as HC movement will always be upward. Seal rock are those that have low to none permeability so that HC cannot escape but are trapped within the reservoir rocks. Shale can be seal rock also as they have porosity but do not have permeability factor so HC will be trapped. Types of traps include stratigraphic and structural.

Stratigraphic traps example is shale as a seal rock and structural traps are fold or faults.

The last thing in the petroleum system is time as have said it above already, time is required for HC generation which is always critical. No more time and no less time while cooking of the organic matter or it will not produce the fuel.