Every now again in writing a blog one puts down an idea that is not only wrong, but pretty obviously wrong if one had stopped to think about 10 minutes about it. So it is with the idea I floated on my last post that property taxes are progressive.

Morris Davis sends along the following data from the current population survey.

No, Martha (John) property taxes are not progressive, and they're not even flat, and not even in California where there is such a thing as a $10 million dollar house. (In other states you might be pressed to spend that much money even if you could.) People with lower incomes spend a larger fraction of income on housing, and so pay more property taxes as a function of income. Mo says this fact is not commonly recognized when assessing the progressivity of taxes.

Part of this is a bit misleading, because  income is a poor concept. Many people with low incomes have temporarily low incomes -- see my S-corp owners with losses from the last post -- and don't move every year to accommodate that year's income. Retired people have less income and own houses. Permanent income or consumption would be much better divisors. On the other hand, I would guess (despite just proving how dangerous it is to guess anything) that housing as a fraction of wealth is even smaller for people with high wealth than is housing as a fraction of income or consumption. There are just so many houses you can buy. 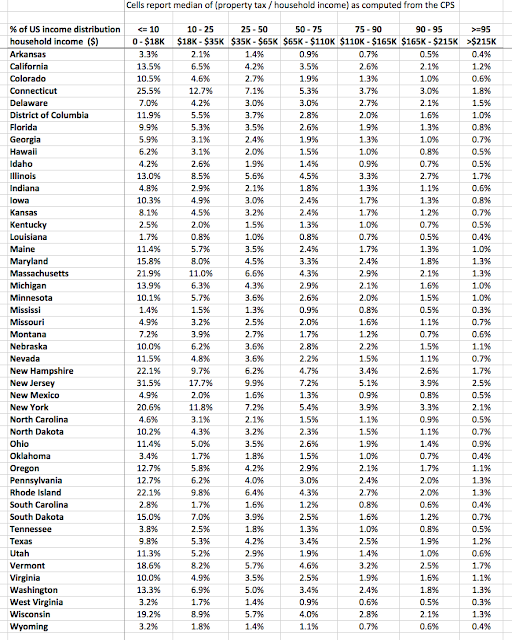 Mo's website has a treasure trove of data by the way.

Let us hope that this does not set a pattern for the year. Now I have my resolution -- stop to think before posting!