Relation of Volcanism to Plate Tectonics

Different styles of volcanism occur at different locations on Earth. Most eruptions occur along plate boundaries, but major eruptions also occur at hot spots (figure above). We’ll now look at the settings in which eruptions occur, in the context of plate tectonics theory and see why different kinds of volcanoes form in different settings.

Products of mid-ocean ridge volcanism cover 70% of our planet’s surface. We don’t generally see this volcanic activity, however, because the ocean hides most of it beneath a blanket of water. Mid-ocean ridge volcanoes, which develop along  ﬁssures parallel to the ridge axis, are not all continuously active. Each one turns on and off in a time scale measured in tens to hundreds of years. They erupt basalt which, because it cools so quickly underwater, forms pillow-lava mounds. Water that heats up as it circulates through the crust near the magma chamber bursts out of hydrothermal (hot-water) vents along these mounds.

Most of the subaerial volcanoes on Earth lie along convergent plate boundaries (subduction zones). Subduction zones border over 60% of the Paciﬁc Ocean, creating a 20,000-km-long chain of volcanoes known as the Ring of Fire. Typically, individual volcanoes in volcanic arcs lie about 50 to 100 km apart. Some of these volcanoes grow on oceanic crust and become volcanic island arcs, such as the Marianas of the western Paciﬁc. Others grow on continental crust, building continental volcanic arcs such as the Cascade volcanic chain of Washington and Oregon or the Andes chain of South America.

Some of the lava that erupts at volcanic arcs consists of basalt derived by partial melting of the asthenosphere. At times when basaltic lava erupts, arc volcanoes display effusive activity. Some of the lava that erupts at arcs particularly at continental arcs is andesitic or rhyolitic. When these viscous lavas are erupting, arc volcanoes display explosive activity. Over the life of a volcano, effusive and explosive activity may alternate. As a result, the volcaniclastic debris erupted at one time may later be cloaked by a shell of hard lava, and thus will be protected from erosion. Eventually, arc volcanism can yield large stratovolcanoes, such as the elegant symmetrical cone of Mt. Fuji. Periods of growth, however, may be interrupted by explosions that leave behind a blasted-apart hulk like Mt. St. Helens (Volcanic Explosions to Remember below).

Due to the diversity of magmas that can form beneath rifts, rifts can host both basaltic ﬁssure eruptions, in which curtains of lava fountain up or linear chains of cinder cones develop, and explosive rhyolitic volcanoes. In some places, they even host stratovolcanoes such as Mt. Kilimanjaro in Africa.

When a hot-spot volcano ﬁrst forms on oceanic lithosphere, basaltic magma erupts at the surface of the sea ﬂoor. At ﬁrst, such submarine eruptions yield an irregular mound of pillow lava. With time, the volcano grows up above the sea surface and becomes an island. When the volcano emerges from the sea, the basalt lava that erupts no longer freezes so quickly, and thus ﬂows as a thin sheet over a great  distance. Thousands of thin basalt ﬂows pile up, layer upon layer, to build a broad, dome-shaped shield volcano with gentle slopes (figure above). As the volcano grows, portions of it can’t resist the pull of gravity and slip seaward, creating large submarine slumps.

Yellowstone National Park lies at the northeast end of a string of calderas, the oldest of which, at the southwest end of the track, erupted 16 million years ago (figure above a, b). Recent and ongoing activity beneath Yellowstone has yielded fascinating landforms, volcanic rock deposits, and geysers. Eruptions at the Yellowstone hot spot differ from those in Hawaii in an important way: unlike Hawaii, the Yellowstone hot spot erupts both basaltic lava and rhyolitic pyroclastic debris.

About 630,000 years ago, immense pyroclastic ﬂows, as well as convective clouds of ash and pumice lapilli, blasted out of the Yellowstone region. Close to the eruption, ignimbrites up to tens of meters thick formed, and ash and lapilli from the giant cloud sifted down over the United States as far east as the Mississippi River (figure above c). The eruption produced an immense caldera, up to 72 km across. When the debris settled, it blanketed an area of 2,500 square km with tuffs that, in the park, reached a thickness of 400 m. The park’s name reﬂects the brilliant colour of volcaniclastic debris (figure above d).

In several locations around the world, huge sheets of low viscosity lava erupted out of ﬁssures and spread out in vast sheets. Geologists refer to the lava of these sheets as ﬂood basalt (figure above). Over time, many successive eruptions of ﬂood basalt can build up a broad plateau. The aggregate volume of rock in such a plateau may be so great (over 175,000 km3), that geologists also refer to the region as a large igneous province (LIP).

An example of a LIP, the Columbia River Plateau, occurs in Washington and Oregon. The basalt here, which erupted around 15 million years ago, reaches a thickness of 3.5 km. Geologists have identiﬁed about 300 individual ﬂows in the Columbia River Plateau. Lava in some of these ﬂows travelled great distances up to 600 km from its source. Eventually, basalt covered an area of 220,000 km. Even larger ﬂood-basalt provinces occur in eastern Siberia (an occurrence known as the Siberian Traps), the Deccan Plateau of India, the Paraná region of Brazil, and the Karroo Plateau of south Africa.

Iceland a Hot Spot on a Ridge

Iceland is one of the few places on Earth where mid-ocean ridge volcanism has built a mound of basalt that protrudes above the sea. The island formed where a hot spot lies beneath the Mid-Atlantic Ridge the presence of this hot spot (probably due to an underlying mantle plume) means that far more magma erupted here than beneath other places along the ridge. Because Iceland straddles a divergent plate boundary, it is being stretched apart, with faults forming as a consequence. Indeed, the central part of the island is a narrow rift, in which the youngest volcanic rocks of the island have erupted (figure above a, b). This rift is the trace of the Mid-Atlantic Ridge. Faulting cracks the crust and so provides a conduit to a magma chamber. Thus, some eruptions on Iceland tend to be ﬁssure eruptions, yielding either curtains of lava that are many kilometres long or linear chains of small cinder cones.

Not all volcanic activity on Iceland occurs sub-aerially. Some eruptions take place under glaciers and melt large amounts of ice. When the melt water bursts through the edge of the glacier it becomes a devastating ﬂood called a jokulhlaup in Icelandic. 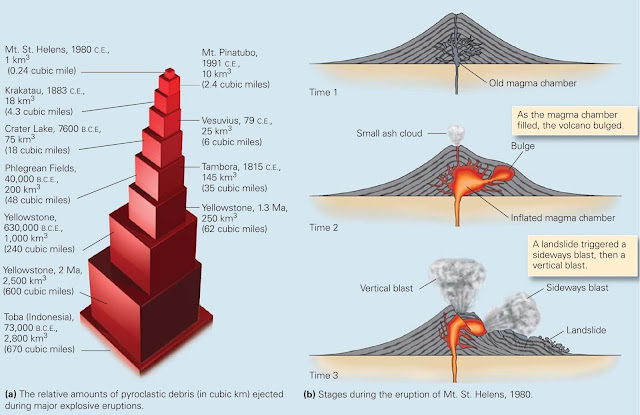 Explosions of volcanoes generate enduring images of destruction. The historical record shows a vast range in the volume of debris erupted, even though the largest observed eruption (Tambora in 1815) was small compared to a super-explosion that took place over 600,000 years ago in what is now Yellowstone National Park, Wyoming (figure above a). Let’s look at two notable examples of explosions.

Mt. St. Helens, a snow-crested stratovolcano in the Cascades of the north-western United States, had not erupted since 1857. However, geologic evidence suggested that the mountain had a violent past, punctuated by many explosive eruptions. On March 20, 1980, an earth quake announced that the volcano was awakening once again. A week later, a crater 80 m in diameter burst open at the summit and began emitting gas and pyroclastic debris. Geologists who set up monitoring stations to observe the volcano noted that its north side was beginning to bulge markedly, suggesting that the volcano was ﬁlling with magma, making the volcano expand like a balloon. Their concern that an eruption was imminent led local authorities to evacuate people in the area.

The climactic eruption came suddenly. At 8:32 A.M. on May 18, a geologist, David Johnston, monitoring the volcano from a distance of 10 km, shouted over his two-way radio, “Vancouver, Vancouver, this is it!” An earthquake had triggered a huge landslide that caused 3 cubic km of the volcano’s weakened north side to slide away. The sudden landslide released pressure on the magma in the volcano, causing a sudden and violent expansion of gases that blasted through the side of the volcano (figure above b). Rock, steam, and ash screamed north at the speed of sound and ﬂattened a forest and everything in it over an area of 600 square km (figure below c). Tragically, Johnston, along with 60 others, vanished forever.

Seconds after the sideways blast, a vertical column carried about 540 million tons of ash (about 1 cubic km) 25 km into the sky, where the jet stream carried it away so that it was able to circle the globe. In towns near the volcano, a blizzard of ash choked roads and buried ﬁelds. Water saturated ash formed viscous slurries, or lahars, that ﬂooded river valleys, carrying away everything in their path.

When the eruption was ﬁnally over, the once cone-like peak of Mt. St. Helens had disappeared the summit now lay 440 m lower, and the once snow-covered mountain was a gray mound with a large gouge in one side. The volcano came alive again in 2004, but did not explode.

An even greater explosion happened in 1883. Krakatau, a volcano in the sea between Indonesia and Sumatra, where the Indian Ocean ﬂoor subducts beneath South-east Asia, had grown to become a 9-km-long island rising 800 m (2,600 ft) above the sea. On May 20, the island began to erupt with a series of large explosions, yielding ash that settled as far as 500 km away. Smaller explosions continued through June and July, and steam and ash rose from the island, forming a huge black cloud that rained ash into the surrounding straits. Ships sailing by couldn’t see where they were going, and their crews had to shovel ash off the decks.

Krakatau’s demise came at 10 A.M. on August 27, perhaps when the volcano cracked and the magma chamber suddenly ﬂooded with seawater. The resulting blast, ﬁve thousand times greater than the Hiroshima atomic bomb explosion, could be heard as far as 4,800 km away, and sub-audible sound waves travelled around the globe seven times. Giant waves pushed out by the explosion slammed into coastal towns, killing over 36,000 people. Near the volcano, a layer of ash up to 40 m thick accumulated. When the air ﬁnally cleared, Krakatau was gone, replaced by a submarine caldera some 300 m deep (figure above d). All told, the eruption shot 20 cubic km of rock into the sky. Some ash reached elevations of 27 km. Because of this ash, people around the world could view spectacular sunsets during the next several years.