Slok on QE, and a great paper - Barokong

Yesterday I participated in the annual US Monetary Policy Forum here in Manhattan, and the 96-page paper presented concluded that we don’t really know if QE has worked. This was also the conclusion of the discussion, where several of the FOMC members present actively participated. Nobody in academia or at the Fed is able to show if QE, forward guidance, and negative interest rates are helpful or harmful policies.

Despite this, everyone agreed yesterday that next time we have a recession, we will just do the same again. Eh, what? If we can’t show that a policy has worked and whether it is helpful or harmful how can we conclude that we will just do more next time? And if it did work, then removing it will have no consequences? There is a big intellectual inconsistency here.

Investors, on the other hand, have a different view. Almost all clients I discuss this topic with believe that QE lowered long rates, inflated stock prices, and narrowed credit spreads. Why? Because when the Fed and ECB buy government bonds, then the sellers of those government bonds take the cash they get and spend it on buying higher-yielding assets such as IG credit and dividend-paying equities. In other words, central bank policies lowered risk premia in financial markets, including in credit and equities. As QE, forward guidance, and negative interest rates come to an end, risk premia, including the term premium, should normalize and move back up again. And this process starts with the risk-free rate, i.e. Treasury yields moving higher, which is what we are observing at the moment. These lovely paragraphs encapsulate well the academic and industry/policy view, and the tension in the former.

I'm interested by the latter tension: Industry and media commenters are deeply convinced that the zero interest rate and QE period had massive effects on financial markets, in particular lowering risk premiums and inflating price bubbles.

I'm deep in the academic view. The industry view forgets that the Fed does not just suck up bonds, it issues interest-bearing reserves in exchange. For every $1 of bond the market does not hold, the market has to hold $1 of additional reserves.  Industry analysis is very insightful about individual traders and investors and the mechanics of markets but forgets about adding up constraints and equilibrium which are the bread and butter of academia. You personally may sell a bond and put the money in to stocks. But someone else has to sell you that stock and hold the reserves.

But us academics need to listen as well as to lecture. Often industry people know something we don't.    So I find this striking difference interesting. Though I haven't changed my mind yet.

TS: But that argument only holds in a closed economy, no? In other words, what if the US based seller of Treasuries to the Fed took the proceeds of their sale of US Treasuries and invested it in Indonesian government bonds?

JC: Then the seller of Indonesian government bonds now is sitting on US reserves.

TS: And what it the European insurance company used the cash they get for selling bunds to the ECB to buy US IG credit?

TS: Anyways, you may say the market view is partial equilibrium but almost everyone in the industry saw the portfolio substitution with their own eyes and believe that it is real.

JC: That helps. Yes, but they saw one side of the portfolio susbstitution. They did not see the other side of that substitution! I think in the end it's mostly foreign banks now sitting on the reserves, so those banks took deposits from someone who sold securities to your industry contacts.

The monetary policy forum is here. The paper is "A Skeptical View of the Impact of the Fed’s Balance Sheet'' by David Greenlaw (Morgan Stanley, so not everyone in industry has the industry view!) Jim Hamilton, Ethan S. Harris (Bank of America Merrill Lynch), and Ken West. It's excellent. It takes 96 pages (plus graphs) to put to rest verities that have been passed around unquestioningly for 8 years. Excerpts from the abstract:

Most previous studies have found that quantitative easing (QE) lowered long term yields, with a rough consensus that LSAP purchases reduced yields on 10-year Treasuries by about 100 basis points. We argue that the consensus overstates the effect of LSAPs on 10-year yields...We find that Fed actions and announcements were not a dominant determinant of 10-year yields and that whatever the initial impact of some Fed actions or announcements, the effects tended not to persist.

This is important. Most of the pro-QE evidence was how yields moved on specific QE announcements. We all know there is price pressure, but it usually lasts only a few hours or days. Much commentary has presumed the price pressure was permanent, as if there is a static demand curve or individual bonds. And the first work will naturally pick the events with the biggest announcement effects, then incorrectly generalize.

...the announcements and implementation of the balance-sheet reduction do not seem to have affected rates much.

And implementation... When the Fed actually bought bonds, interest rates went up 2/3 times. See below.

Going forward, we expect the Federal Reserve’s balance sheet to stay large. This calls for careful consideration of the maturity distribution of assets on the Fed’s balance sheet.

Mild objection. If QE has no effect, then the maturity distribution is irrelevant, as Modigliani and Miller would have predicted, no?

A much-recycled graph showing 10 year rates have been trundling down for 20 years unaffected by QE or much of anything else, and that actual QE purchases - - increases in reserves -- are associated with higher 10 year rates: 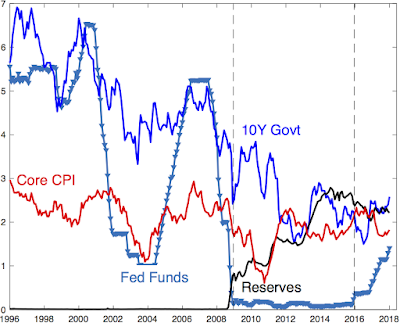