The tax discussion is moving to personal income taxes, and the world is waiting to hear the actual Republican proposal, due tomorrow (Thursday).

With apologies to blog readers who know all this in their sleep, I thought I might explain just why (some) economists keep chanting "broaden the base, lower marginal rates," or why I keep saying that taxes don't matter, tax rates matter to economic growth.  This is grumpy economist, Saturday morning cartoon edition. Perhaps a colorful graph will help as you try to explain taxes to relatives this Thanksgiving.

Now consider the red line. This line can represent a progressive tax: Exempt the first $50,000 of income, so people who make less have to pay a smaller share of their income in taxes, and charge a 100% tax rate on the rest. Equivalently, this line represents $50,000 of tax shelters and deductions -- employer-provided health care, charitable contributions to a foundation that employs your relatives and flies you around on private jets, a deduction for home mortgage interest, credits for the solar cells on your roof, and so on.

You can see the hole in the argument. If we tax the marginal dollar after $50,000 at 100%, you won't bother working the second 20 hours, and the government will get no revenue. More deeply, slowly, and insidiously, in my view, people choose easy college majors that lead to $50,000 jobs, not harder ones that lead to $100,000 jobs, or they don't start businesses.

The green line is an economists' ideal tax.  Everyone pays the first $50,000 no matter what and then keeps everything after that. People would choose to work more than 40 hours a week, and the economy would take off.

Of course, that's not realistic as an income tax, but it's the idea behind "land" taxes, the recent fashion for "monopoly" taxes, and so on. Find something to tax that has no disincentive effects, and tax the heck out of it. One of my graduate school professors explained (in jest!) that we should tax kidney-dialysis machines. If you need it, you really need it and you'll pay anything to get one.

But at least we can move from something like the red line to something more like the blue line. Broaden the base, lower the marginal rate.

Here I think we have gotten to an unproductive argument. See the next graph 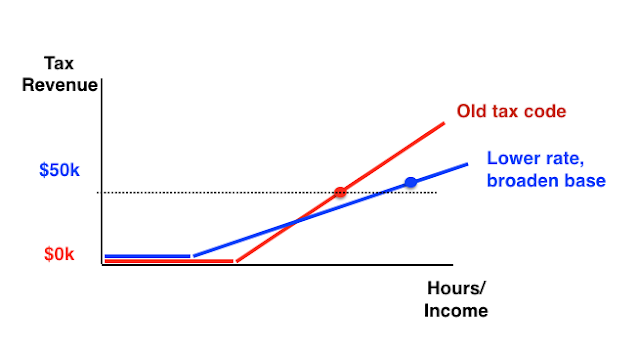 If we broaden the base, and lower the rate, we increase incentives to work. Then, to raise the same revenue, we don't have to make the lines cross at the old revenue. The new line can lie below the old line at the old work effort, but greater growth will make up the revenue, as shown.

The argument is not whether "tax cuts pay for themselves." That's an extreme possibility. But tax rate cuts do partially pay for themselves, so one can raise the same revenue from a tax system that appears, on static scoring (ignoring that the points move to the right) to raise the deficit instead.

This argument is correct, but it leads to a huge fight over just how much growth will increase, and when. It is hard to quantify. It is especially hard, in my view, because most government analysis ignores all the important channels. We focus on labor effort. But once we have chosen careers and jobs, most people work the same amount. The damage is more insidious. Slowly, people drop out of the labor force. Slowly, people chose easier college majors. Slowly, people choose safe and steady but not well paying jobs rather than risky high reward business startups. Slowly, people invest in  complicated lawyer-intensive tax-avoidance strategies. This all takes time.

And we have a huge deficit. So, I would prefer not to fight this argument. Broaden the base and lower the rates on static scoring. When money starts roaring in, cut the rates. Agree on the structure of the tax code for a generation, and let rates adjust as needed. Yes, many readers will worry that lots of revenue will lead to lots more spending. OK, let's write in that rates go down further if and when the revenues increase, rather than cut them now.

Furthermore, if we had to make a revenue-neutral reform, I think the pressure to get rid of the deductions would be much stronger. These mostly benefit the rich anyway (class warriors, why are you so silent on the regressive effects of home mortgage, charitable, employer health care, and state and local deductions??) You just can't get significant rate reductions on a revenue neutral basis without really cutting the deductions, tax expenditures, and with them much of the complexity and corruption of the code.

Alas, this eminently sensible idea -- broaden base, lower marginal rates, redistribution-neutral, and revenue-neutral, growth-oriented reform -- does not characterize much of what I'm hearing about the upcoming personal income tax changes.

One thing we are hearing more of is expanded deductions, for example for child care.  This is supposed to give a "tax cut to the middle class." Well, again, a tax cut and a marginal tax rate cut are entirely different things, and have different effects on growth.

The next graph gives the "middle class" a "tax cut" in two different ways -- by lowering the marginal rate, or by offering a new deduction or credit, and keeping the old rates intact. At the blue dot, our taxpayer has received the same "tax cut." But notice that by adding a deduction, we have done nothing to improve our taxpayer's incentives. In fact, we have made matters worse. There are offsetting "income" and "substitution" effects in provoking effort. As we get wealthier, we choose to work less. As opportunities are larger, we work more. This is all income effect, and no substitution effect. 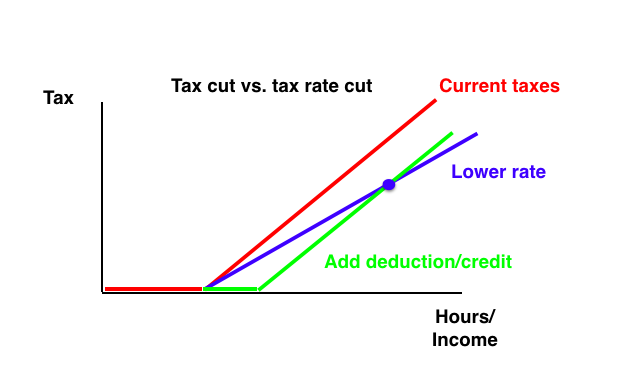 It gets worse. The budget impact of this deduction is obviously large. Everybody in the US gets the deduction, all the way up the income scale. For that reason, most of these deductions phase out. Sure, "gazillionaires don't need help with their childcare expenses." (A good example of bad economic thinking all around.) So the credit phases out. The next graph shows what happens if we add a deduction or credit that phases out with income: 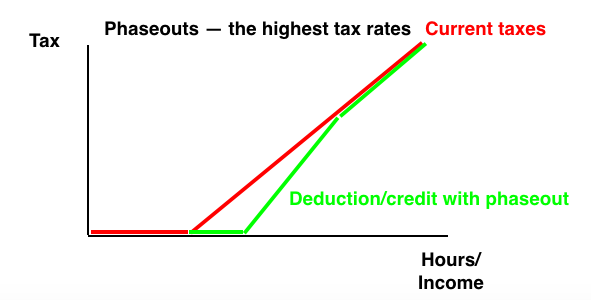 The steepest part of the line -- the greatest disincentive to work -- is in the phaseout region. In fact, the Americans facing the highest marginal tax rates are those precisely in the "middle class," where earning an extra dollar phases out credits, health insurance subsidies, food stamp subsidies, and so forth. On average, pretty much from 0 to $60,000 there is very little incentive to work -- or, again, to study, to choose harder professions, to move to take a job, to start a business and so on.

This is a little bit unfair. The credits and deductions do have incentive effects. That's half of why they're there. The mortgage interest deduction gives people an incentive to buy rather than rent, to borrow rather than save, to buy bigger rather than smaller, and to refinance frequently. (Interest payments are tax deductible, principal payments are not.) The childcare credit gives people an incentive to have children. (That this incentive is inversely scaled with income is another interesting issue.) The health care deduction encourages us to spend a lot more on health insurance and less on solar cells and electric cars. The solar cell and electric car deduction encourages us to spend more on those and less on food. And so forth.  If these activities encourage economic growth, perhaps it's worth suffering the disincentive to work, study, save, or start businesses.

An honest economist must admit that for economic growth, taxes do not matter. Marginal tax rates matter.  If there were a way to "tax the rich" without raising the disincentive to all the socially useful activities that becoming rich, or working to pass wealth on to your children entails, and if our society decided it wanted such redistribution, we would have much less argument against it. We would do the world a favor, I think, to harp most on incentives, which the world seems to ignore, and much less on our personal moral feelings about redistribution, pro or con.

How high are our marginal rates? Another important principle: All taxes matter, not just federal income taxes, and benefit phaseouts are just as important as actual taxes. Add to the Federal 43% top marginal rate the state income tax -- 13.5% in my California -- plus sales taxes on everything yo buy -- 9% in lovely Palo Alto. Pundits' habit of only quoting the federal income tax in isolation is profoundly wrong. And if you're one dollar below the medicaid cutoff, you face an essentially infinite marginal tax rate.