The rent is too damn high - Barokong

[Julian] Castro would provide housing vouchers to all families who need help. Right now, only 1 in 4 families eligible for housing assistance gets it. He would also increase government spending on new affordable housing by tens of billions of dollars a year and provide a refundable tax credit to the millions of low- and moderate-income renters who have to spend more than 30% of their incomes on housing.

I'm actually surprised it's as much as a fourth. Most government programs outside medicare and social security attract tiny fractions of the eligible people. Watch out budget if people catch on.

Massachusetts Sen. Elizabeth Warren calls for a $500 billion federal investment over the next 10 years in new affordable housing....

New York Sen. Kirsten Gillibrand has signed on to both the Harris and Warren plans, which have been introduced as legislation.

In sum, they're piling on to pay your rent or mortgage.

The economic foolishness of all this is painful. Housing is not a single good. It's location, location, location, and also size and condition. This isn't about homelessness. Everyone lives somewhere, so the point is to subsidize larger, better, or more conveniently placed housing. Or, to free up money for people to spend on other things.

Economics is about incentives. If the government pays for all your rent past 30% of your income, that's a big incentive to rent a huge apartment and not to earn any extra income. =

"Affordable housing," doesn't mean affordable housing, in the same way affordable hamburgers mean affordable hamburgers. It's a catchword for "below-market rate" housing, usually mandated by zoning boards, but now I guess to be paid for by the government. But when you give away something for, by definition, less than the market rate, that means people line up for it. Like scarce rent-controlled apartments, is one more impediment to people moving for better opportunities.

Econ 101: What happens if you subsidize demand, but do not unleash supply? 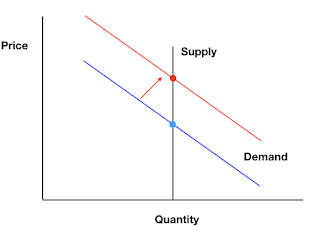 Prices go up. Period. It ends up entirely in the pockets of current property owners. There is a good case this happened already. To earn a gazillion dollars in tech, you need to move to the Bay Area. There are only so many houses, so the great gains in productivity end up in the pockets of existing landowners.

Aha, you will answer, but they have a fix for that: rent control, now sweeping the nation. We know where that leads.

They also answer, as above,the Federal government will start building houses and apartments.

I guess millenials are too young, and nobody reads any history any more, but, we and especially Europe have tried this one over and over, to catastrophic failure. Go visit the sites of housing projects, now thankfully torn down, in Chicago. They look like Chernobyl. Go visit the cruddy outskirts of European cities, with government built cement apartment blocks. This is our vision for the "middle class?"

In sum, the candidates promise to repeat for housing the immense success of subsidies and supply management and provision that the the government has just accomplished for health care, insurance, and education.

It's usually a good idea to figure out what's broken before we start fixing things. That idea never seems to occur to anyone in politics when talking about economic policies. Where is the market failure in home and apartment building? Why is the private sector not building more housing? The answer is pretty obvious -- zoning, building codes, insane permitting processes and so forth.

One tiny ray of light:

New Jersey Sen. Cory Booker would provide financial incentives to encourage local governments to get rid of zoning laws that limit the construction of affordable housing.

But again, "affordable housing" means "housing allocated by politics," and "housing you'd better not leave once you get it, and better not earn too much either." I wish the article just said "limit the construction of housing, which makes it unaffordable!"

The usual coexistence of subsidy and restriction plays out almost comically in the "gentrification" issue, politicians wanting to be all things to all people:

"It is not acceptable that, in communities throughout the country, wealthy developers are gentrifying neighborhoods and forcing working families out of the homes and apartments where they have lived their entire lives," [said] Vermont Sen. Bernie Sanders,..

Warren would also give grants to first-time homebuyers who live in areas where black families were once excluded from getting home loans. "Everybody who lives or lived in a formerly red-lined district can get some housing assistance now to be able to buy a home," Warren told attendees at the She the People Presidential Forum in Houston this spring.

Technically, "Everybody" includes white millennials. I wonder how she will stop that.

Calfornia's SB50 proposal to force  local zoning to allow development near transit had a similar feature. Yes, we allow development everywhere -- except in poorer neighborhoods most in need of development, which are protected from the evils of new Starbucks and Whole Foods popping up.

These are tough times to be an economist. As a matter of technocratic policy, this is not hard stuff. Physicists don't have to write blog posts because the candidates want to enshrine the phlogistic theory of heat. Doctors don't have to rail about HHS policy on four humor management. Somehow we are left railing against fallacies understood since the 1700s.

It is, of course, no better on the right. The benefits of free trade and migration have also been known since the 1700s. It is just, sadly, that there is no debate on the right at the moment.

This is a real weakness of the American  political equilibrium, that in a reelection year all the new ideas and analysis come out of the party in opposition. It would be a great time for the Republican Party to try to come to terms with what Trumpism means, how it relates to traditional conservatism, and to hash out ideas like this. Alas, that will not happen.

One is tempted to dismiss all this as rhetoric that will settle down in the general election. But I don't think one should take too much comfort. Trump ended up doing a lot of exactly what he said he would do. Politicians often do.

On this, I found fascinating a tidbit fromDan Henninger in WSJ, covering a poll of Democrats conducted by Fox News.

Fox asked these Democratic voters whether they wanted “steady, reliable leadership” or a “bold, new agenda.” Steady and reliable crushed bold and new by 72% to 25%.

Anyone consuming the media every day the past year would have concluded that the Democratic left’s “bold, new agenda” had taken over the Democratic Party lock, stock and barrel. Most of their presidential candidates obviously thought so.

How else to explain why Sens. Warren, Harris and Cory Booker instantly saluted Bernie Sanders’s socialized medicine or, even more incredibly, the antic Alexandria Ocasio-Cortez’s multitrillion-dollar Green New Deal? Recall how Nancy Pelosi, whose 70-something sense of political smell is still more acute than her juniors’, called it “the green dream, or whatever.”

In fact, when Fox asked these Democrats what they most wanted from their candidate, 74% chose “unite Americans” against just 23% who want to “fight against extreme right-wing beliefs.” Looks like there’s a silent majority inside the Democratic Party, unmoved by the propaganda of social media.

These are the parts of the Fox poll, surfacing a nostalgia for steadiness and unity, that should upset the Trump campaign, not Mr. Biden’s 10-point lead 16 months before the election.

Mr. Henninger did not add that Mr. Biden is the one who should be listening hardest. He is currently drifting fast to the left.  The poll tells us that this time, my friends, the answer is not blowin' in the wind. I hope more people listen.