An essay at The Hill on what to make of market volatility:

What’s causing the big drop in the stock market, and the bout of enormous volatility we’re seeing at the end of the year?

The biggest worry is that this is The Beginning of The End — a recession is on its way, with a consequent big stock market rout. Is this early 2008 all over again, a signal of the big drop to come? 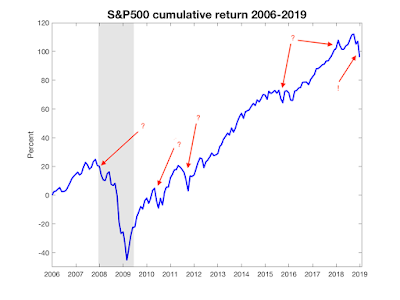 Maybe. But maybe not. Maybe it’s 2010, 2011, 2016, or the greatest of all, 1987. “The stock market forecast 9 of the last 5 recessions,” Paul Samuelson once said, and rightly. The stock market does fall in recessions, but it also corrects occasionally during expansions. Each of these drops was accompanied by similar bouts of volatility.  Each is likely a period in which people worried about a recession or crash to come, but in the end it did not come.

Still, is this at last the time? A few guideposts are handy.

There is no momentum in index returns. None. A few bad months, or days, of stock returns are exactly as likely to be continued as to be reversed. The fact is well established, and the reason is simple: If one could tell reliably that stocks would fall next month, we would all try to sell, and the market would fall instantly to that level.

Big market declines come with a recession, as in 2008. But recessions are almost as hard to forecast as stock prices, and for much the same reason.

They asked me to hold off a few weeks before posting the whole thing. So either wait two weeks or head over to The Hill. I also wrote here "The Jitters" related thoughts about the spring 2018 bout of volatility.