(This is Part III of a series.Part II andPart IV   See theoverview for a summary. The punchline comes inPart V. )

So, why do we care about the distribution of wealth? -- Especially,  as we learned in part I that wealth is poorly defined and poorly measured, and we learned in part II that much of the distribution of "wealth" reflects higher market prices for the same assets, which do not increase their owner's ability to consume over a lifetime? Why so much anger, even from commenters on this blog?

In the popular imagination these are all the same.  In fact and data they are vastly different. Income varies a lot from year to year, especially among the risk-taking wealthy. One year's income is a very distorted measure of lifestyle inequality. Taxes, transfers and savings buffer consumption from income. Most wealthy people leave their wealth invested in companies or give it away slowly through charitable foundations, so wealth does not translate to consumption, both in fact and in the theory I outlined last time.  The popular imagination just doesn't comprehend how immense a billion dollars is -- it's really impossible to "consume" any substantial fraction of this much wealth.  So, in fact, most super-wealthy people reinvest almost all their income in their  businesses or in new businesses just by default, and then give it away. Why is this a crime?

...carefully measuring its wealth is important. The public cares about the distribution of economic resources,

Well, the "distribution of economic resources" is consumption or lifestyle inequality, not wealth inequality.

A cynic would say Saez and Zucman focus on income inequality first,  wealth inequality later, and make the measurement choices they do, because at every stage of the game these choices make the numbers look more unequal and divergent over time. We saw that last time with the choice to use the same absurdly low interest rate for all fixed income investments, even though the wealthy earn much higher returns -- and how this boosted their measured wealth by a factor of 4.

But in service of what are they putting an elephant's foot on the scale? Well, obviously a wealth tax. They're up front about that. And the larger wealth "inequality" can appear to be, the larger their argument for a wealth tax. But given that we are not addressing lifestyle inequality with the wealth tax, just what is the argument? So as usual in much political economics the answer comes first and the question keeps changing.

Spoiler: The answer is not that well hidden.  Saez and Zucman's answer is explicitly political. They want a wealth tax in order to take away what they perceive as excessive political power of wealthy people. Big wealth inequality numbers serve that cause. This has nothing to do in the end with economics. We ought to be more upfront and debate the real point.

We'll get to all that in parts IV and Vt. Let us return to asking why of each of the choices made by Saez and Zucman, of which Smith et al only quibble with measurement.  Why accept these rules of the game?

Saez and Zucman define wealth as

"the current market value of all the assets owned by households net of all their debts...Our wealth concept excludes human capital, which, contrary to non-human wealth, cannot be sold on markets."

Well, there is perhaps a certain logic to that, especially given the eventual political agenda. Although people don't want to sell their assets, perhaps it's interesting to know how much they could get if they decided to do so.

But the "marketable" test vanishes quickly. Already they include funded pensions, and other claims backed by assets which people can't sell. And then they start capitalizing private business and partnership income, which looks economically just like labor income.

In addition, as we have seen time and again, the separation between "capital income" and "labor income" is slippery, and people are really good at reclassifying one as the other in response to changes in the tax code. 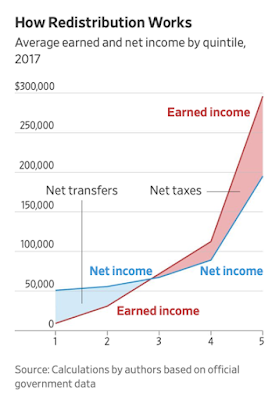 Phill Gramm and John Early made the above graph in the Wall Street Journal contrasting the distribution of pre and post tax and transfer income.

Or, from Gerald Auten and David Splinter 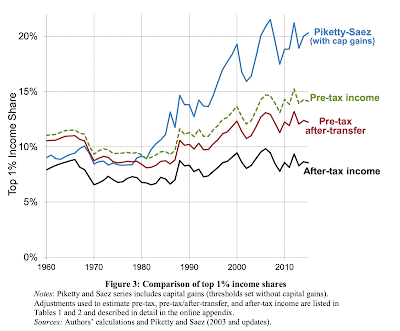 Well, obviously, leaving taxes and transfers out makes the "problem" look a lot worse. And maybe we're moving on to wealth inequality because the rising income inequality narrative is falling apart.

But leaving out taxes and transfers is  even more insidious:

Imagine that the next President declares a national emergency and raises taxes and transfers to the point that the "Net income" line in first graph is perfectly flat, and consumption is exactly equal for everyone in the US. Yet, suppose that nobody reacts to incentives, as most on the left seem to believe, and the pre-tax income line is the same. Then measured income inequality, and wealth inequality capitalizing such income remains exactly the same!

How much redistribution should we do? If we accept this question, the answer is always "more!"

The only way taxes and transfers can reduce a measure of pre-tax inequality is by, in fact, so lowering the incentive to work or save that it kills the top end of the pre-tax income distribution. I.e. by destroying the economy.

Saez and Zucman interestingly do not include the present value of unfunded defined-benefit pensions as "wealth." Most of these are government employee pensions. It will indeed be interesting to see if these are not in the end bailed out by the general taxpayer. That seems like a reasonable assumption, though again it boosts inequality by removing a lot of middle class wealth.

Likewise, their answer to not capitalizing social security, medicare, medicaid, etc. is that the government has made these promises with no idea how to pay for them. Though again that removes a source of lower-income wealth that's a lot more stable than partnerships!

But the US federal government has just as little idea how it will pay back Treasury bonds. They too are unfunded? If we do not include unfunded promises as wealth, why not these too? Well, the cynic says, that would make inequality go down since rich people hold treasuries and lower income people hold social security and pension promises.

If you are measuring and worrying about wealth inequality, not consumption inequality, you are by definition worried about invested and reinvested wealth. A typical Uber-wealthy person leaves his or her money invested either indirectly through stocks and bonds, or directly in private businesses and partnerships, and takes most of their capital "income" and reinvests it in those or new companies. That's why the distribution of "wealth" is so much more extreme than the distribution of consumption.

But just what harm are they doing? Really, the uber wealthy are providing the vast bulk of national saving and investment funds. If we start taxing wealth, and they respond by consuming it, giving it away, or giving it to political candidates, are we better off? Why is high income thrift a social problem?

There is no sensible economic question I can see for this. There is a political one. You read often from inequality critics the complaint that the wealthy "control" too much of the world's assets.   I have not seen Saez and Zucman use this word, and rightly so because it shouts out to a sort of conspiracy nut-job view of the world.

How can we care about a problem that is nearly impossible us to define or to measure, let alone person on the street to notice?

As above, Saez and Zucman offer because

"the public cares about the distribution of economic resources,"

Why is any "inequality" a "problem" requiring "policy-maker" attention? We should ask this question rather than just accept it. The minute you say inequality is a problem, you say that society is made better off by making someone a lot worse off and someone else a little worse off, so that we are more equal. No squirming, this is an inescapable conclusion, the only question left being how much.

I think many of us (me) worry about lack of opportunity, and the many barriers to advancement on the lower end of America's economic spectrum. I think society as a whole is better off if the bottom end rises. This worthy impulse is, I think, what many people mean when they say they worry about "inequality." But they recognize that the life of a poor kid from Fresno is completely untouched by whether a venture capitalist in Palo Alto upgrades from a turboprop to a private jet, and will be made no better off when confiscatory wealth taxation forces him or her to drive.  If you're worried about opportunity, mobility, left-out and left-behind people and areas, good for you -- but "inequality" is a poor word to describe this worry. Use better words that do not empower disastrous economic policies.

Even if you're worried about inequality, then why should you worry only about inequality within a country, and not across countries? Libertarians and left-wingers used to agree that the country that you are assigned to at birth should not matter to your rights as a human being. Global inequality has gone down tremendously in the last decades.

Well, why to all these questions? The only sensible answer is that none of these sensible alternatives would look bad, or seem to justify a wealth tax. We are once again searching for questions that justify a given answer.

So why do we want a wealth tax? Join me in Part IV, wealth taxes