From the Wall Street Journal, a familiar story of medical pricing mischief:

The usual picture is a huge sticker price, an "insurance discount" and Medicare and Medicaid paying even less than that. I googled around a bit looking for the latter numbers, which I didn't find but I did findhere a nice study of cost variation

The average typical cost for a total knee replacement procedure was $31,124 in 64 markets that were studied. However, it could cost as little as $11,317 in Montgomery, Alabama, and as high as $69,654 in New York, New York. Within a market, extreme cost variation also exists. In Dallas, Texas, a knee replacement could cost between $16,772 and $61,585 (267 percent cost variation) depending on the hospital.

Similar trends also were seen for the average typical cost for a total hip replacement procedure, which averaged $30,124. However, it could cost as little as $11,327 in Birmingham, Alabama, and as much as $73,987 in Boston,5 Massachusetts, which had the greatest variance within a given market, with costs as low as $17,910 (313 percent cost variation).

These are, I think, insurance costs not the above sticker prices. Also from the LA times,

New Medicare data show that Inglewood's Centinela Hospital Medical Center billed the federal program $237,063, on average, for joint replacement surgery in 2013. That was the highest charge nationwide. And it's six times what Kaiser Permanente billed Medicare eight miles away at its West L.A. hospital. Kaiser billed $39,059, on average, and Medicare paid $12,457. The federal program also paid a fraction of Centinela's bill -- an average of $17,609 for these procedures.

That does give some sense that Medicare is paying even less than private insurers.

1) This market is grotesquely uncompetitive. In any competitive market, suppliers bombard you with price information to get you to shop, and prices are driven to something like cost. Airlines don't need a government run nonprofit to disclose how much they charge. There is not just massive price-based competition for flights, there is massive competition for price-shopping services -- google flights vs. orbitz vs. kayay vs. priceline vs. expedia and so on.

2) The insane list price, the insurance discount of about half, and medicare paying about half that is telling. You would expect a cash discount. There are people with $30k to spend, insurance that doesn't cover hip surgery, and hospitals should be jumping to serve them, cash and carry, no paperwork. There are plenty of people with that kind of money to spend on cosmetic surgery.

The clearest sign of pathology in US health care is that the cash market is dead. Even if you have the money, you must have an insurer to negotiate the "insurance discount."

I suspect that in fact if you go to the hospital and say you're paying cash and negotiate, you can get a much better deal. So long as you don't let anyone else know what you're paying. But even that is no defense. You don't have to go visit airline offices and negotiate one on one for a ticket to New York. Competitive businesses chase after their cash customers. And people with $30k to spend on hip replacements don't want to spend weeks negotiating.

Why don't they advertise? Hospitals cannot publicly say what the cash price is. If they did, insurance would demand that price too and the cross subsidies would vanish.

The quoted price is a fiction. It allows hospitals to declare lots of charity care when they treat uninsured people with no money at all. But more importantly, it gives them a great starting point for a one-on-one ex-post negotiation for the unwary.

As in "cross subsidies," we have an immense scheme of cross-subsidies going on, in which private insurance at $70k overpays compared to Medicare, and the hospital is left free to fleece the unwary with outrageous $140k bills. Cross subsidies cannot withstand competition.

Google flights shows $591 for a first class ticket from New York to Birmingham Alabama, and the most expensive hotel I can find there is $177 per night. Why not fly to Alabama? Well, of course, insured patients are insured. And insurance is, per law, state based, so Alabama is out of network!

The government needs to do something about this, right? Steve mentions one apparently failed effort,

In 2009, New York’s then-attorney general, Andrew Cuomo, announced the creation of a nonprofit organization called FAIR Health. Its mandate is to provide consumers accurate pricing information for all kinds of medical services.

I found the FAIR Health website and queried its database. It reported that the out-of-network price for a hip replacement in Manhattan was $72,656, close to what Mr. Frank’s and my insurance companies had paid. The problem: We were both in-network, and FAIR Health estimated that cost as only $29,162.

I never did figure out the reason for the difference in pricing—but somebody ought to. 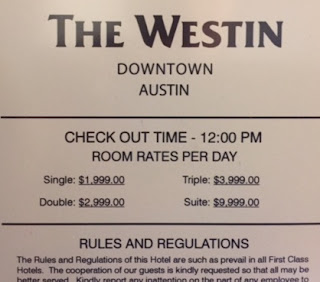 Well, that regulation is working great isn't it.

It's easy to jump to the conclusion that people need more skin in the game, greater copays, greater incentive to shop. But the real problem is lack ofsupply competition. Incentive to shop is no good if you can't find out what things actually cost.

Hotels do want to tell you the real price. Until hospitals do too, they will find their way around disclosure regulations too. It's easy to post phony prices and wink that nobody actually pays that price.  Hospitals already do that when forced to disclose by stating huge prices and then offering insurers bundle discounts separated from the individual bill.