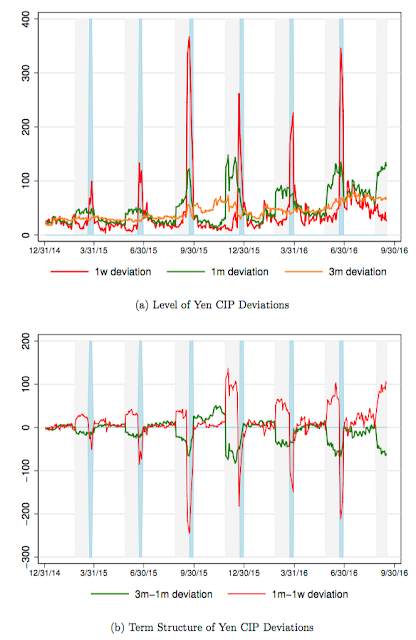 What's going on with these quarter-end spikes?

Even the reverse repo facility's take-up is impacted on quarter-end days, seeing enormous spikes in the amount of assets being put into the facility in month end.

[Reverse repo is how large non-banks, or foreign banks, can invest in interest-paying reserves at the Fed.]

US banks have an opposite incentive (disclaimer, this now is me, not their opinions). If spreads open up at end of quarter, then US banks can take on a huge amount of risk for a few days, and capital requirements only apply to the rest of the quarter.

So the sloshing back and forth of who holds risky positions is a nice little arbitrage of the different regulations for both sides, not just the Europeans. When analyzing financial markets, always remember that for a seller there must be a buyer, and someone is holding the position.

What's the moral of the story? The title of Jon's piece is "Hindering The Fed's Ability To Raise Interest Rates." (Titles are often not under the writer's control.) I'm not convinced. The spikes are in the Fed's band. If the Fed wants to raise the band, I don't see why it can't. US banks seem happy to take the other side of the game (less reserves, more FX for a few days), for a profit.

I see it as one more indication of the problems caused by capital requirements that hinge on capital relative to risk-weighted assets. Assets are hard to measure, risk weights are often wrong.  I prefer capital requirements that measure only bank liabilities:  market value of equity divided by face value of short-term debt, with the limit measuring volatility by equity option prices. (see "A way to fight bank runs—and regulatory complexity" and longer blog post version). This capital ratio uses no regulators or accountants at all to measure assets. And there would be no end of quarter vs. quarter average window dressing.

I see it as an indication of how banks are not very competitive.  This does not happen in competitive markets, especially ones in which nimble new competitors can enter FX or overnight debt markets and remove arbitrages.

I also see it as a success of the Fed's large balance sheet, interest paying reserves, and reverse repo programs. I emphasize that because the reporting out of the Fed is now suggesting a desire to "normalize," i.e. go back to the system that worked so well in 2007, and get rid of these innovations.

Given the regulatory snafu -- and there will be endless regulatory snafus like this in the future -- and the consequent desire for big portfolios to shift around at quarter end, the miracle is that interest rates only move a tenth of a percent or so each quarter. That's because the quantities Jon mentioned can slosh around. European banks can get reserves for a day or two, and then slosh out again. If the overall quantity of reserves were smaller, or fewer institutions were able to get them (if reverse repo were closed), then the price swings would be even larger. It makes the case more strongly for my "reserves for all" proposal, that the Treasury should offer fixed-value, floating-rate debt, just like bank reserves, to anyone, not just "banks."

Update: Jon corrects me. In fact, some of the spikes did fall below the Fed's lower bound. As treasury rates have often been below the lower bound. There is a potential problem with the Fed's ability to lower rates. The Fed pays more interest to banks on excess reserves. Why don't the banks just say "thank you for the present," earn the extra interest on reserves, pay nothing more on deposits, and nothing else changes? Well, competition. Banks should be competing for deposits, and thus raising the deposit rate as the interest they receive on reserves goes up. That this is manifestly not happening tells you something about bank competition. Banks should be trying to sell treasury portfolios to get more reserves, putting downward pressure on treasury prices and raising treasury interest to the interest on excess reserves. Happening sort of, the treasury rate is also often below the lower bound. Money market funds should be selling treasuries and buying reserves through the reverse repo mechanism. As you can see, there is some doubt whether higher interest on reserves will percolate through the economy. (I wrote a whole paper on this). The Fed does not do the one thing that would guarantee this arbitrage -- open up the balance sheet. Bring us treasuries, we give you reserves in any quantity.

In sum, yes, the lower bound on Fed funds rate is breached, as treasuries are often below that bound. There is some issue whether banks are competitive enough to let interest on excess reserves move on to other rates with a fixed balance sheet. But I still don't see the regulatory arbitrage of european banks buying reserves at quarter end as a key mechanism limiting widespread higher interest rates.