Just why do we think that the Fed raising and lowering interest rates has a strong effect on output (or inflation)? Just why does the Fed control short-term interest rates rather than the money supply, or something else?

Dan's essay is a nice quick tour through the history of this question. No, there is not as much logic and evidence behind this hallowed belief as you might think, and yes, people did not always take the power of interest rates for granted as they seem to do now. Dan's historical tour is worth keeping in mind.

This question is especially relevant right now. We are unlikely to see big changes in interest rates going forward. And central banks are busy thinking of different things to control -- the size of the balance sheet; treasury, MBS, corporate bond, and even stock purchases; use of regulatory tools to control lending. So we may be on the cusp of a fairly major change in thinking about what central banks do -- what their primary tool is -- and how that tool affects the economy. (And, I hope, whether it is wise for central banks to use new tools that come along. Their mandate is not to be the great macroeconomic-financial planner after all.)

As Dan points out,

it is a well-known and well-established fact that interest rates are not very important for investment, or for spending decisions generally. 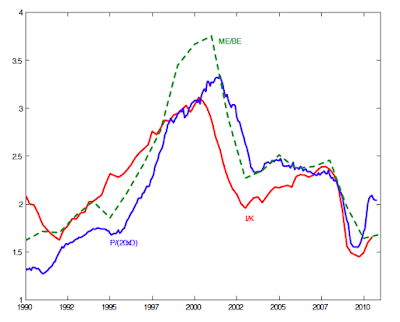 Here is the latest version of a graph I've made several times to emphasize this point. ME/BE is the market to book ratio of the stock market, or "Q.'' P/(20xD) is the ratio of price to 20 x Dividends. IK is the ratio of investment to capital.

I am a long-time skeptic of the stories that say low levels of interest rates encourage asset price "bubbles." After all, borrowing at 1% and investing at 5% is the same as borrowing at 5% and investing at 9%. Why should thelevel matter to therisk premium? But those stories are repeated more and more often (like the story about interest rates!) So overall, what may break out is a story that the central bank can influence risk premiums-- this needs segmented markets, leveraged intermediaries, and other financial frictions, modern heirs to the "credit channel"-- and risk premiums influence investment. Macro-finance is full of this sort of analysis right now.

I recoil at the idea that central banksshould start operating this way -- targeting risky asset prices, using a range of tools to do it, and thereby trying to control investment spending.  Central plannerscan set prices too, but that doesn't mean theyshould. But this may be where the world is going.

Now, back to Dan. After reminding us that consumption and investment spending does not respond (much) to interest rates, Dan's intellectual history. (Excerpts here, the original is worth reading)

It's worth remembering that the power of pure interest rate changes is a recent idea. Separately,

I'm not sure Bernanke and Blinder (as well as other fans) agree with the last sentence, but the bank lending channel has always suffered the problem that 1) Fed actions have little effect on lending -- as Dan mentions, reserve requirements really don't bite 2) Only very small businesses really rely on bank lending. There are lots of them, but not much GDP.

So how did belief in the power of interest rates come about?

When he became chairman of the Fed, Paul Volcker made ending inflation the goal of policy. … He announced that he wanted to pursue a new approach to implementing monetary policy that “involves leaning more heavily on the [monetary] aggregates in the period immediately ahead.” …it seems to have worked. Inflation declined from its April 1980 peak of 14.5% to about 2.4% in July 1983….The policy change was also followed by back-to-back recessions…. the fact that the change in policy was followed by a marked reduction in both inflation and output led economists and policymakers to dramatically change their view about the power of monetary policy to effect output and inflation.

…economists debated whether the success of the Volcker’s monetary policy was due to a marked reduction in the supply of money or to higher interest rates. But the growth rate of M1 monetary aggregate changed little over the period. Moreover, the growth rate of M2 actually increased. In contrast, the federal funds rate, which was 11.6% the day the FOMC changed policy, increased to a peak of 17.6% on October 22, 1979. The funds rate then cycled, hitting cyclical peaks above 20% in late 1980 and mid-1981. Given the behavior of the M1 and M2 monetary aggregates and the behavior of the federal funds rate during the period, a consensus formed around the idea that the success of Volcker’s policy was attributable to high interest rates not to slow money growth.

Like the Phoenix, the idea that monetary policy worked through the interest rate channel rose from the ashes. … the FOMC adopted the federal funds rate as its policy instrument in the late 1980s, circa 1988. … Policymakers pay essentially no attention to monetary aggregates…

And academic analysis of monetary policy is focused entirely on interest rates. Dan doesn't mention new-Keynesian models, but they epitomize the current thinking. The Fed sets interest rates, with no money at all, and higher interest rates induce people to spend less today and more tomrrow.

We ran into the situation, as you may remember, when the money supply, nonborrowed reserves, and various other non-interest-rate measures on which the Committee had focused had in turn fallen by the wayside. We were left with interest rates because we had no alternative. … – Alan Greenspan, FOMC Transcript, July 1-2, 1997, pp. 80-81.

Where does this leave us? In the short run, the fact remains. We have no alternative. If I were to wake up as Fed chair tomorrow, I'd move the interest rate levers just about the same way as anyone else does. In the short run, I think these reflections should add to our humility -- we really don't understand the mechanism as well as most analysis suggests, and a new idea will come sooner or later.

In the longer run, those new ideas seem to be breaking out. Central banks, increasingly gargantuan financial regulators, are using a wide range of tools to influence the economy via asset prices. In my own view this is a bad idea. But like most bad ideas it is slipping in sideways largely un noticed.