Now that 30 days have passed, the full text of the WSJ oped advocating a VAT instead of all other federal taxes. Previous post with extra comments. 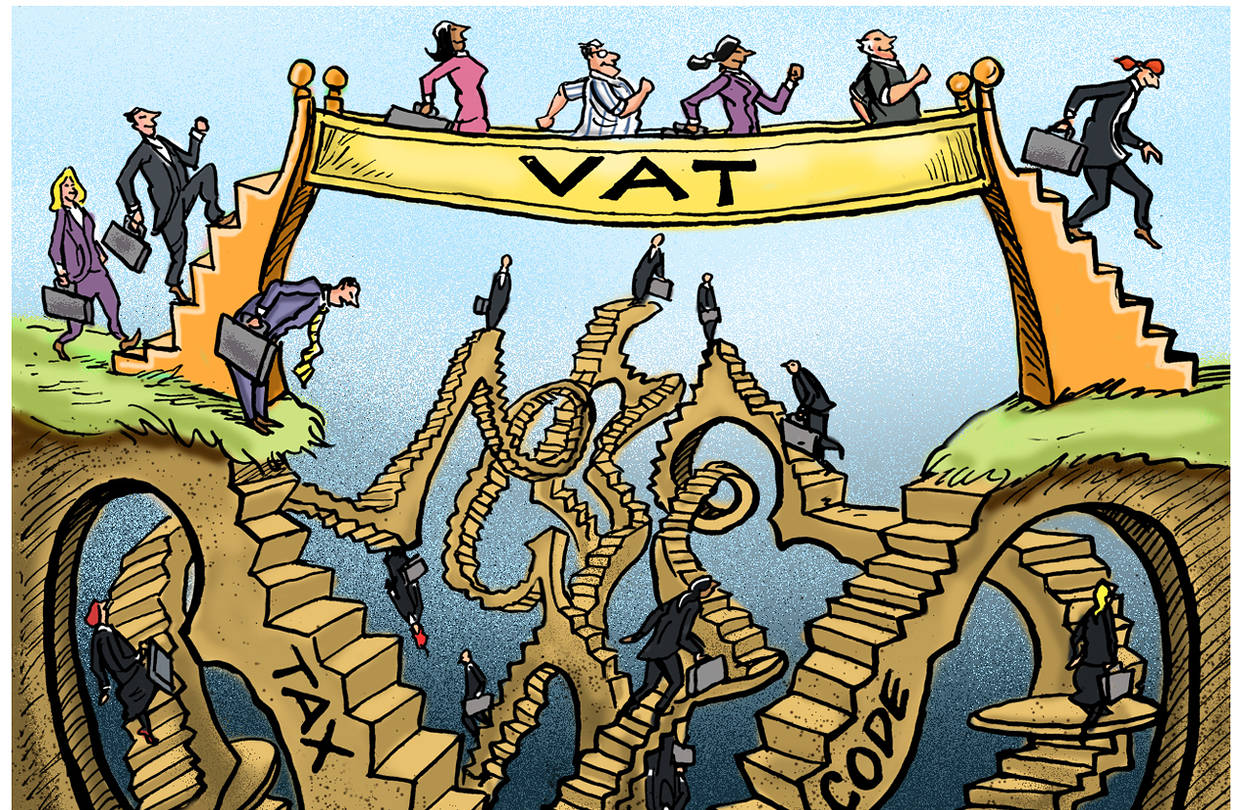 Soon the Trump administration and congressional leaders will unveil their tax-reform proposal. Reports indicate the proposal will include some reductions in corporate and personal rates and the end of some tax deductions. But true reform is likely to be stymied by the usual interests, by those who see the tax code primarily as a way to transfer income to or from favored or disfavored groups, and by politicians who dole out deductions, exemptions and subsidies to supporters.

So if the process stays its normal course, don’t expect the complex and dysfunctional U.S. tax code to change much. But if our leaders were to attempt a really fundamental reform, they could break the political logjam. Changes must be simple, understandable and attractive to voters. And only fundamental reform paired with deregulation can hope to raise economic growth to 3% or more.

The best way to do this is to eliminate entirely the personal and corporate income tax, estate tax and all other federal taxes, and to implement instead a national value-added tax—essentially a national sales tax.

Much of the current tax mess results from taxing income. Once the government taxes income, it must tax corporate income or people would incorporate to avoid paying taxes. Yet the right corporate tax rate is zero. Every cent of corporate tax comes from people via higher prices, lower wages, or lower payments to shareholders. And a corporate tax produces an army of lawyers and lobbyists demanding exemptions.

An income tax also leads to taxes on capital income. Capital income taxes discourage saving and investment. But the government is forced to tax capital income because otherwise people can hide wages by getting paid in stock options or “carried interest.”

The estate tax can take close to half a marginal dollar of wealth. This creates a strong incentive to blow the family money on a round-the-world cruise, to spend lavishly on lawyers, or to invest inefficiently to avoid the tax.

Today’s tax code tries to limit this damage with a welter of complex shelters: 401(k), 526(b), IRA, HSA, deductions for corporate investment, and complex real-estate and estate-tax shelters. Taxing something and then offering complex shelters is a sure sign of pathology. But by taxing cars, houses and boats when people or companies buy them, all this complexity can be thrown out. With a VAT, money coming from every source—wages, dividends, capital gains, inheritances, stock options and carried interest—is taxed when it’s spent.

A reformed tax code should involve no deductions—including the holy trinity of mortgage interest, employer-provided health insurance, and charitable deductions. The interest groups for each of these deductions are strong. But if the government doesn’t tax income in the first place, these deductions vanish without a fight.

In these and other ways, if Congress and the president drop the income tax in favor of a VAT, or another simple consumption tax, they can break the political logjam and achieve a dramatic pro-growth reform.

What about progressivity? It is easy to make a value-added tax progressive: In place of current exemptions, send everyone a $10,000 check. Or people could receive a refund according to how much they spend, similar to income-tax refunds. Taxpayers could get a full refund for the first $10,000, half for the next $10,000, and so forth. Electronic record-keeping makes this straightforward—it’s just a big debit or credit card reward—and everyone would have an incentive to report purchases rather than to hide income.

But the chaos in U.S. income redistribution is as great as the anarchy in the tax code. Tax discussions fall apart because the redistributive influence of each change is assessed in isolation. By measuring how the tax and transfer system work together, politicians could get better taxes and more effective redistribution.

The U.S. also needs an integrated social-insurance program: Send checks to needy people, yes, but also monitor the amount they get from all government sources, including college financial aid, health insurance, energy assistance, Medicare, Medicaid, Social Security, unemployment insurance, food stamps, farm programs, housing and so on. Even without reforming the programs, it is necessary at least to measure their total effect to calibrate accurately any tax-based redistribution.

What about the tax rate? Well, if the federal government is going to spend 20% of gross domestic product, the VAT will sooner or later have to be about 20%. Tax reform is stymied because politicians mix arguments over the rates with arguments over the structure of taxes. This is a mistake. They should first agree to fix the structure of the tax code, and later argue about rates—and the spending those rates must support.

Is all of this unrealistic? No. Sometimes when little steps are impossible, big jumps are feasible. It is unrealistic to think that tweaks to the current system will produce a big change from the status quo.

Mr. Cochrane is a senior fellow at Stanford University’s Hoover Institution and an adjunct scholar at the Cato Institute.

Update:  I learned of a precedent for the progressive VAT idea, Yaacobi Nir, "Progressive V.A.T. as a Substitute for Income Tax" December 2008