I did an interview with Cloud Yip at Econreporter, Part I and Part II, on various things macro, money, and fiscal theory of the price level. It's part of an interestingseries on macroeconomics. Being a transcript of an interview, it's not as clean as a written essay, but not as incoherent as I usually am when talking.

On the same topics, I will be giving a talk at the European Financial Association, on Friday, titled  "Michelson-Morley, Occam and Fisher: The radical implications of stable inflation at the zero bound,"slides here. (Yes, it's an evolution of earlier talks, and hopefully it will be a paper in the fall.)

And, also on the same topic, you might find useful a set of slides for a 1.5 hour MBA class covering all of monetary economics from Friedman to Sargent-Wallace to Taylor to Woodford to FTPL.  That too should get written down at some point.

The talk incorporates something I just figured out last week, namely how Sims' "stepping on a rake" model produces a temporary decline in inflation after an interest rate rise. Details here. The key is simple fiscal theory of the price level, long-term debt, and a Treasury that stubbornly keeps real surpluses in place even when the Fed devalues long-term debt via inflation.

Contrast a perpetuity with one period debt, and a frictionless model. Frictionless means constant real rates and inflation moves one for one with interest rates

where Q is the bond price, B is the number of bonds outstanding, and s are real primary surpluses. For one period debt Q=1 always. (If you don't see equations above or picture below, come back to the original here.)

Now, suppose the Fed raises interest rates, unexpectedly,  from \(i\) to \(i^\ast\), and (really important) there is no change to fiscal policy \(s\). Inflation \(P_{t+1}/P_t\) must jump immediately up following the Fisher relation. But the price level \(P_t\)might jump too.

With one period debt, that can't happen -- B is predetermined, the right side doesn't change, so \(P_t\) can't change. We just ramp up to more inflation.

But with long-term debt, any change in the bond price Q must be reflected in a jump in the price level P. In the example, the price of the perpetuity falls to

so if we were expecting P under the original interest rate i, we now have

If the interest rate rises permanently from 5% to 6%, a 20% rise, the price level jumps down 20%. The sticky price version smooths this out and gives us a temporary disinflation, but then a long run Fisher rise in inflation. 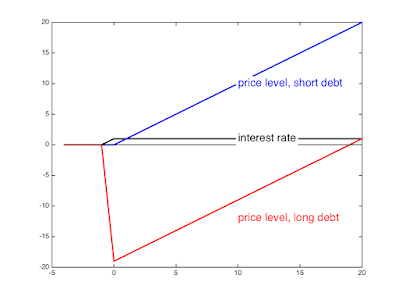 Do we believe it? It relies crucially on the Treasury pigheadedly raising unchanged surpluses when the Fed inflates away coupons the Treasury must pay on its debt, so all the Fed can do is rearrange the price level over time.

But it tells us this is the important question -- the dynamics of inflation following an interest rate rise depend crucially on how we think fiscal policy adjusts. That's a vastly different focus than most of monetary economics. That we're looking under the wrong couch is big news by itself.

Even if the short-run sign is negative, that is not necessarily an invitation to activist monetary policy which exploits the negative correlation. Sims model, and this one, is Fisherian in the long run -- higher interest rates eventually mean higher inflation. Like Friedman's example of adjusting the temperature in the shower, rather than fiddle with the knobs it might be better to just set it where you want it and wait.