A draft of a new paper is up on my webpage, "Michelson-Morley, Occam and Fisher: The Radical Implications of Stable Inflation at Near-Zero Interest Rates." This combines some talks I had given with the first title, and a much improved version of "does raising interest rates raise or lower inflation?"

The long period of quiet inflation at near-zero interest rates, with large quantitative easing, suggests that core monetary doctrines are wrong. It suggests that inflation can be stable and determinate under a nominal interest rate peg, and that arbitrary amounts of interest-paying reserves are not inflationary. Of the known alternatives, only the new-Keynesian model merged with the fiscal theory of the price level is consistent with this simple interpretation of the facts.

I explore two implications of this conclusion. First, what happens if central banks raise interest rates? Inflation stability suggests that higher nominal interest rates will result in higher long-run inflation. But can higher interest rates temporarily reduce inflation? Yes, but only by a novel mechanism that depends crucially on fiscal policy. Second, what are the implications for the stance of monetary policy and the urgency to “normalize?” Inflation stability implies that low-interest rate monetary policy is, perhaps unintentionally, benign, producing a stable Friedman-optimal quantity of money, that a large interest-paying balance sheet can be maintained indefinitely. However, with long run stability it might not be wise for central bankers to exploit a temporary negative inflation effect.

The fiscal anchoring required by this interpretation of the data responds to discount rates, however, and may not be as strong as it appears.

Big novelties in this draft -- at least things I have learned recently:

1) There is now a mechanism that produces a temporary decline in inflation from a rise in interest rates. It comes out of the fiscal theory of the price level and long term debt. If the Fed unexpectedly raises interest rates, that lowers nominal bond prices. If the real present value of surpluses does not change (if monetary policy does not change fiscal policy), then a lower nominal value of the debt and unchanged real value of the debt require a drop in the price level. It works, but it has nothing to do with your grandfather's ISLM, "aggregate demand,'' Phillips curve, money, sticky prices, and so on.

2) In this case and more generally, a temporary decline in inflation when interest rates rise unexpectedly does not rescue traditional policy advice!

It's only temporary! So you do not get long-lasting disinflation or stabilization out of raising rates. Raising rates gives you a temporary disinflation, then inflation gets worse. This is a mechanism perhaps for the 1970s, when each rate rise fell apart in more stagflation -- Chris Sims calls it "stepping on a rake" -- not the 1980s. For that sort of disinflation you need fiscal policy too.

And since only unexpected rate changes have the negative inflation effect, it can't be the basis of systematic, expected policy, like the Taylor rule in old-Keynesian models.

In sum, there is a big difference between a temporary negative sign and a long run positive sign, long run stability, and the traditional view which is a temporary and permanent negatives sign and long-run instability.

There will be a few more drafts of this paper and slides and talks. Unless one of you finds a big mistake and clears up my thinking on it. 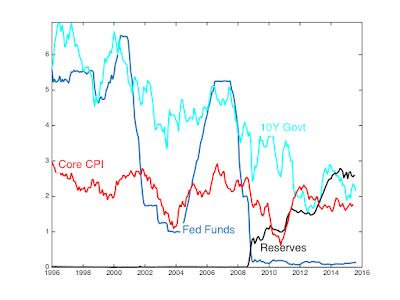 The fact: interest rates hit zero, and nothing happened. No deflation spiral. No sunspot volatility. It seems that inflation is stable when interest rates are pegged.