The explosion occurred in the middle of the congregational prayers, the Muazin and the Imam of the mosque were killed instantly

Redaksi    September 07, 2020    News , viral    Comment
At least 20 people were killed and 17 others in critical condition because of an explosion at a mosque near the capital of Bangladesh, Friday (4/9). The number of victims was quite large because the accident occurred when Muslims were performing congregational prayers.
A seven-year-old boy, a muazin, and a mosque imam were also killed in the incident in Narayanganj City, while other victims were treated at the Sheikh Hasina National Institute of Burn and Plastic Surgery in the capital Dhaka.
Through the Anadolu News Agency, Bangladesh Fire and Civil Defense Service officer Ershad Hossain confirmed the death toll. He added that those injured had severe burns.

Three committees have been formed to investigate the incident, including a committee from the fire service, Hossain continued.

According to the deputy assistant director of the Bangladesh Fire and Civil Defense Service, Anayet Hossain, the victims who were in critical condition had burns to the throat. The hospital doctor said that the victims had burns of 30-70 percent all over their bodies. 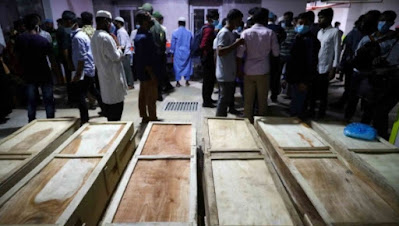 President Abdul Hamis, Prime Minister Sheikh Hasina, and the Minister of Religion expressed their deep sorrow over the incident. They also ordered assistance for the victims and requested an investigation into the incident.
ESDM Minister Nasrul Hamid said that the main cause of the explosion was currently still being investigated. However, it has been confirmed that the explosion came from the AC of the mosque.

He immediately instructed all electricity supply companies to check electrical connections and air conditioning conditions in mosques, temples, and other religious institutions in their coverage areas.

The Dhaka Tribune newspaper reported that there was a pipe crossing under the mosque and that there was a gas leak, which then accumulated in the room as the mosque windows were closed.
The explosion was likely triggered by sparks when someone turned on or off the air conditioner or fan, he added, citing local officials who said the mosque had recently complained about a gas leak